Husqvarna rider vows to return to 250MX as quickly as possible. 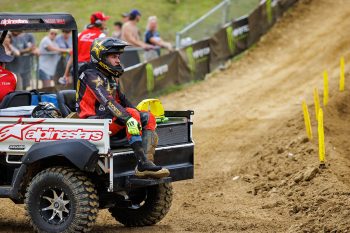 Following a multi-rider pileup during the second 250MX moto at Spring Creek, Stilez Robertson will undergo further checks on an injured ankle sustained in the fall.

It was a challenging round seven of 2022 Lucas Oil Pro Motocross for the Rockstar Energy Husqvarna rider, who battled a bike problem in the first moto en route to P10.

The number 50 was determined to improve in moto two, but in the early stages of the race tried to avoid the fallen Jo Shimoda and Nate Thrasher. In the process, he collided with teammate Jalek Swoll which caused them both to crash and ultimately brought an end to their races.

“My day was eventful,” Robertson said. “I qualified almost the best I have all year, so I was excited. First moto, I think I had a little bike problem that hindered me a little bit.

“In the second moto, I saw the two riders crash in front of me and I tried to go left and unfortunately, my teammate was there and I hit him. I folded my ankle pretty hard and that’s all she wrote. I’m going to go home and get it checked out and try to get back as quick as I can.”

It is unconfirmed whether Robertson will compete this Saturday at Washougal, as Swoll stated he will race at round eight despite pulling out of the second moto in Millville.