Clout, Tanti and Chisholm in for WSX with CDR Yamaha team

Fourth rider remains to be confirmed ahead of October season-opener. 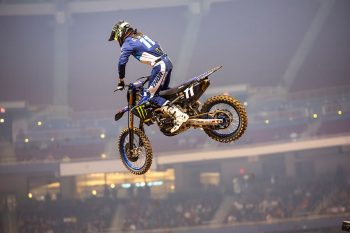 The CDR Yamaha team has confirmed that Clout will be on a 450 and Tanti will ride a 250, with Chisholm’s class yet to be announced.

“My dream has always been to compete and win a world championship in the 450cc class and I’m excited to be given the opportunity to race in the FIM-sanctioned World Supercross Championship,” said Clout, who is the current national ProMX champion.

“Craig and the CDR team have instilled confidence in my ability to compete on supercross’s global stage with the best riders from around the world and I’m looking forward to the challenge, but understand it’s going to take hard work, determination and an intense drive to succeed.”

Current Australian ProMX red plate-holder Tanti will step back to a 250 for WSX and, like Clout, has a share of international experience that will bode well when the gates drop in WSX. Notably, Tanti will ride a 450 in the Australian Supercross Championship.

Chisholm, meanwhile, will potentially ride either the WSX or SX2 category at CDR, coming off a season in American supercross where he split his time between both thanks to a fill-in deal with Monster Energy Star Racing Yamaha.

“As we embark on our journey to compete for an FIM-sanctioned World Supercross Championship title, we’re thrilled with the prospects of our team and believe the combination of Luke, Aaron and Kyle gives us an impressive roster to compete for podiums right out of the gates during this pilot season,” said Dack.

“These three guys possess several critical intangibles on and off the track that will serve our team well when competing on the global stage against the best riders supercross has to offer and we couldn’t be more excited to get the season going.”

The opening round is set for Cardiff, Wales, at Principality Stadium on 8 October, with information surfacing that the Australian GP – yet to be formally announced – is due to take place at Melbourne’s Marvel Stadium between 21-22 October.