Rostrum return for Yamaha rider after laps at the front. 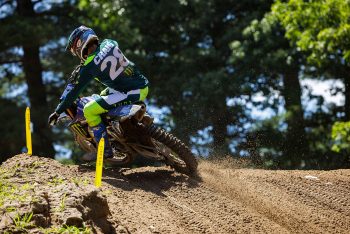 A podium in moto one at Southwick was a positive uplift for 450MX contender Christian Craig, with the Monster Energy Star Racing Yamaha rider ‘pumped’ to finish third and lead a number of laps.

Craig made his way past Ken Roczen for P1 in the opening moto and maintained the position until lap eight when teammate and round winner Eli Tomac came by. He was relegated to third by red plate-holder Chase Sexton five laps later.

“I’ve never really been great here at Southwick,” Craig explained. “I’ve had decent results but never really gelled with the track, so I really wanted to do well this year. We qualified decent, and in the motos, I got off to two good starts and led the first moto for almost 20 minutes.

“I made a couple of big mistakes that cost me huge and was shuffled back to third and stayed there. I was pumped with that as it’s been a while since our podium at Pala.”

Despite costly mistakes making him vulnerable to Tomac and Sexton, the first race at round six marked Craig’s strongest result since Pala’s opener, where he scored 3-3 results to start the season.

The number 28 suffered from a lack of energy throughout the second moto in Massachusetts and crossed the line in eighth, which meant he ultimately finished fifth overall on day.

“In the second moto, I was optimistic and got off to another good start in second, but then right away, I just knew my energy was gone from the first moto and that I was going to suffer,” Craig added.

“No excuses, though. The bike was good all day; it was just that my energy wasn’t there for the second moto. I was shuffled back to eighth and got fifth overall, but we gained a little bit in the points and had some positives today.”