Consistency of Sexton sees him hold onto the red plate again. 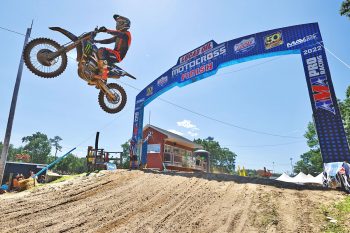 A spectacular performance from Tomac in the opening 450MX moto saw him climb forward from eighth position to the lead by midway, eventually winning by 7.340s over red plate-holder Chase Sexton (Team Honda HRC).

It was Team Honda HRC’s Roczen who claimed the holeshot and led the opening laps, before Christian Craig (Monster Energy Star Racing Yamaha) took charge on lap three and stayed there all the way until Tomac hit the front on lap eight.

Sexton would also make his way by toward the later stages, but Craig managed a top-three result, comfortably ahead of Ryan Dungey (Red Bull KTM) – despite going down during the moto – and Max Anstie (Fire Power Honda Racing), who made a last-lap move on Roczen.

There was once again no stopping Tomac in the second premier class encounter this afternoon, making his way to the lead within 10 minutes to run and going on to win by 10.079s.

A clutch ride from Sexton saw him work his way into second during the closing stages to maintain the points lead, with Plessinger putting in one of his best rides of the year for third position.

Longtime leader Roczen, who scored his second holeshot of the day, crossed the line in P4, this time ahead of Anstie after he mirrored his result from moto one. Sixth to 10th included Anderson, Dungey, Craig, Barcia and Bloss.

The overall podium for the round saw Tomac on the top step, joined by Sexton and the resurgent Plessinger in third today. At halfway in the series, it’s still Sexton with the red plate by a single point over Tomac leading into Millville next Saturday, 16 July.