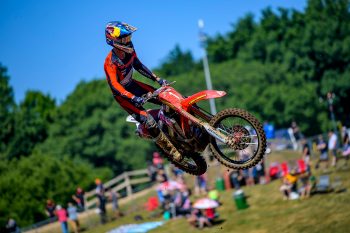 It was a day of mixed fortunes at RedBud for Jett Lawrence, suffering a mechanical DNF in the opening 250MX bout before rebounding to take the moto two victory.

The Team Honda HRC rider entered Michigan undefeated in terms of overall round wins in the 2022 Lucas Oil Pro Motocross Championship, having won four in a row.

The Australian worked his way into the lead during the first moto at round five, before the mechanical issue struck on lap 10 and forced him out of the race with a zero-point haul, while brother and title-rival Hunter Lawrence took the points lead as he crossed the line in P2.

“I was feeling good today,” Jett Lawrence recalled. “I love this track, and we ended up getting the bike handling pretty good for the first moto. I took some bad lines on the first lap and went back to fourth, but in a couple turns I went up to third.

“I made my way past Jo [Shimoda] and Hunter [Lawrence], and then the bike started feeling funny and losing power. That’s part of this sport, and luckily, we had a bit of a points lead, which helps me a little bit.”

Moto two saw a commanding performance from the defending 250MX champion, charging his way forwards from eighth on lap one to take his fifth race win of the season.

“On the second-moto start, it was hard to tuck around since I was so far out wide, but I made my way through and got the race win. It sucks to lose the red plate, but at least I lost it to Hunter,” he added.

The younger Lawrence brother trails the red plate by seven points as the series approaches its halfway point this Saturday at Southwick.