I ‘still had a lot of exhaustion in my bones’ – Roczen 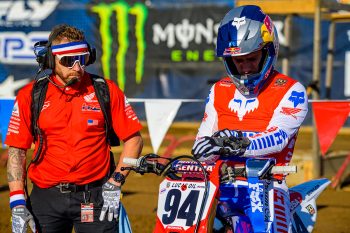 Team Honda HRC’s Ken Roczen has revealed that he battled the effects of sickness throughout the fifth round of the 2022 Lucas Oil Pro Motocross Championship, severely impacting his charge in both motos at RedBud.

The number 94 was particularly strong in the opening half of each moto and held the lead in race two before he suffered as the bout progressed.

“I tried to hang in there as long as I could, but I got sick this week and still had a lot of exhaustion in my bones,” Roczen said. “I had to drop the anchor in the second moto because I was empty.

“I’ve hardly been on the bike this whole last week, and I was laid up on the couch most of the time, so that combination just wasn’t ideal heading into this weekend. I’m working on getting healthy so I can attack next weekend.”

Roczen ultimately finished RedBud fifth overall with 4-7 moto scores, with this not being the first time sickness has impacted the CRF 450R rider who, most recently, had his 2022 450SX campaign brought to a premature end due to health issues.

Entering round six of Lucas Pro Motocross this Saturday at Southwick, Roczen is third in the 450MX standings, 30 points from red plate-holder and teammate Chase Sexton.