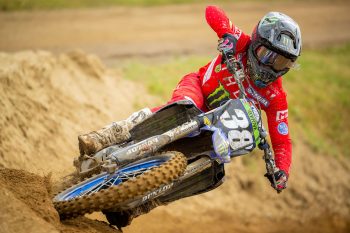 Deegan, 16, swiftly made his way to the lead in the opening moto and stretched out his advantage to claim a sizeable 32.579s win.

The early stages of moto two saw Deegan and Mark Fineis (KTM) battle for P1 before the number 38 asserted himself at the front of the field and ultimately made it a perfect scorecard on his Scouting Moto Combine debut.

Daxton Bennick (KTM) recovered from tenth in the first race to land second overall courtesy of a P2 finish in moto two, ahead of Fineis in third with a 4-6 scorecard as Gage Linville (Honda) and Casey Cochran (Husqvarna) completed the top five.

The Scouting Moto Combine is an initiative designed to give hand-picked amateur talent the chance to showcase their potential to key industry members at select Lucas Oil Pro Motocross Championship events, and also receive coaching on both on and off-track elements. 2022 marks its second season.

Coaches in attendance at RedBud were Broc Glover, Chad Reed, Jeff Stanton and Michael Byrne, as the next Combine takes place at the Ironman national, alongside the 11th round of the 2022 Lucas Oil Pro Motocross Championship.  A complete lineup of riders and coaches will be announced in the build-up to the event.