Direct updates from round five of the season in Michigan.

Follow the 2022 Lucas Oil Pro Motocross Championship with direct updates from round five of the season at RedBud through Racefeed. 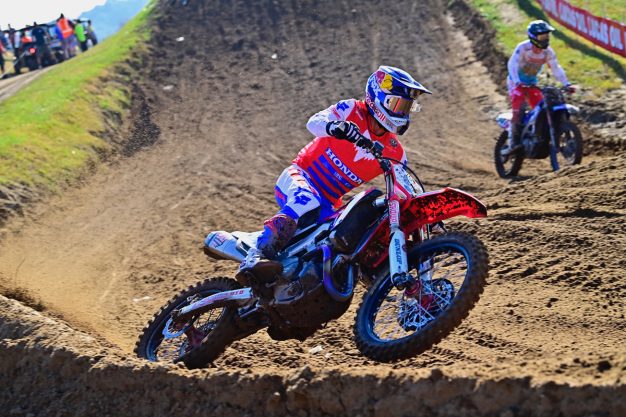 450MX moto one:
Eli Tomac took a wire-to-wire win in the opening 450MX moto. He began with a big holeshot from Joey Savatgy (Monster Energy Kawasaki) and Justin Barcia (TLD Red Bull GasGas), and he quickly put distance between himself and the pack. Monster Energy Kawasaki’s Jason Anderson went down in the first turn and remounted at the rear of the field. Ken Roczen worked his way through traffic up to third over the opening couple of laps, but would succumb to pressure from his Team Honda HRC team-mate, Chase Sexton, as the laps wore down. Up front, Tomac continued his charge, building an comfortable seven-second lead by the time he crossed the finish-line. Sexton would make a late move on Savagty to take second from the Kawasaki racer, as Roczen and Chrisian Craig (Monster Energy Star Yamaha Racing) rounded out the top five. Ryan Dungey (Red Bull KTM) came home in sixth, ahead of Anderson, who put in a remarkable charge from the rear of the field to P7. Barcia, Aaron Plessinger (Red Bull KTM) and Marshall Weltin (Twisted Tea HEP Motorsports Suzuki).

450MX moto two:
Tomac claimed victory in the second race to cap off a perfect July 4 weekend. Justin Barcia secured the holeshot, followed closely by Tomac and Roczen, but it only took three laps for Roczen, then Tomac to clear the TLD Red Bull GasGas rider. Tomac slowly whittled down Roczen’s two-second lead, while an intense four-rider battle broke out between Barcia, Anderson, Dungey and Sexton. After getting momentarily held up in an Anderson crash, Sexton went into damage control, quickly picking off riders as he charged up to third. Ahead of him, Tomac took advantage of a slight mistake by Roczen to take over the race lead with 15 minutes left on the clock. From there Roczen faded dramatically, allowing multiple riders past him, including Sexton. There was no stopping Tomac, though, as he claimed an eight-second victory from Sexton, with Barcia completing the podium. Anderson would finish fourth and Dungey a hard-fought fifth. P6 to P10 were filled by Craig, Roczen, Plessinger, Savatgy and Garrett Marchbanks (Muc-Off FXR ClubMX Yamaha).

250MX moto two:
A fired-up Jett Lawrence took a convincing come-from-behind victory in the second 250MX race as Shimoda claimed his first-ever round win. Monster Energy Pro Circuit Kawasaki rookie, Ryder DiFrancesco, scored the holeshot before his team-mate Seth Hammaker took the lead. Two corners later Hammaker crashed spectacularly, allowing KTM privateer Tye Masterpool to lead the charge over the opening laps. It was short-lived, though, as Hunter Lawrence had him in his sights and put in a good pass several laps later. Jett Lawrence, who had last pick of the start-gate after his previous DNF and was as low as 12th on the opening lap, rolled up his sleeves and charged through the pack, catching and passing his brother with 10 minutes left to go. The brothers would finish in that order. Shimoda, who was caught up in a crash with Cooper and Hampshire in the opening lap, put in an incredible ride to come back to P3 and claim the round win in the process. Kitchen and Robertson finished fourth and fifth, while Hampshire, Masterpool, Thrasher, Cooper and Mosiman completed the top 10.