Principality Stadium in Cardiff, Wales, to host historic first round. 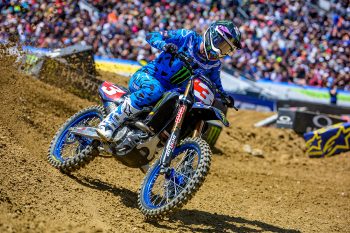 Reigning American champion Eli Tomac has been named as a wildcard in the British Grand Prix, which will open the three-round 2022 FIM World Supercross Championship (WSX) on 8 October.

Monster Energy Star Racing Yamaha’s Tomac will compete in the round one of the series led by SX Global, set to launch at Principality Stadium in Cardiff, Wales.

“I’m pumped to be heading to Cardiff to compete in the FIM World Supercross British Grand Prix,” Tomac commented. “It’s a huge opportunity for fans to witness world championship supercross for the first time and I’m excited to be part of such a historical moment for the sport.”

“While I’m definitely looking forward to going head-to-head with Ken [Roczen], I also know there’s going to be a bunch of fast, talented riders from around the world all lining up for their shot at a world championship. It’s going to be an epic battle for certain.”

With Ken Roczen announced yesterday for the full season and 2020 world champion Tomac now joining as a wildcard for the opener, significant momentum is beginning to build for the inaugural WSX Championship.

“Our mission with WSX is to elevate supercross to a truly global audience and give international fans the opportunity to experience this incredible sport at a world championship level,” said Adam Bailey, managing director – motorsport for SX Global.

“As the kick-off to this global championship, the British Grand Prix marks a momentous occasion for supercross and fans will see the likes of Roczen, Tomac, and a host of other world-class riders go head-to-head for the first time in a FIM world Supercross in the UK!”

Seven of the 10 licensed teams officially announced and Tomac is the first of the wildcards confirmed – there will be four in total per event. It’s widely expected that Melbourne, Australia, and Jakarta, Indonesia, will host the remaining rounds of the pilot season this year.

“The British Grand Prix in Cardiff represents a groundbreaking moment in supercross history, as well as the shared vision, passion and hard work of our SX Global team to elevate supercross on a truly global level,” said Tony Cochrane, president, SX Global.

“We believe the demand for supercross around the world can sustain this sport year-round and the FIM World Supercross Championship will be the platform that achieves this. The British Grand Prix and 2022 pilot season are merely the beginning and there’s much work to be done, but we could not be prouder to begin this incredible journey to expand the global relevance of this great sport.”