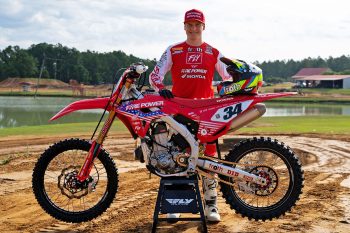 Fire Power Honda has announced the signing of Max Anstie ahead of his debut with the team at RedBud in this weekend’s fifth round of the 2022 Lucas Oil Pro Motocross Championship.

Anstie will ride 450MX at RedBud, Southwick and Millville, potentially as well as the Motocross of Nations (MXoN) at RedBud in late September.

“Being competitive is always my priority and I know that Fire Power Honda can give me what I need to chase my goals in the USA,” Anstie commented. “The first month with the team has been great and I cannot wait to get behind the gate at RedBud. It will be a great opportunity to show just how much work we have done!”

Anstie’s participation in the next three rounds of Pro Motocross marks the beginning of a new chapter for the team, however, didn’t indicate the terms of his contract at this point or whether it will span through 2023, as anticipated.

Following two seasons with HEP Motorsports aboard a Suzuki, Anstie was part of the BBMX-operated Rocky Mountain ATV/MC KTM team at the beginning of this year, but departed along with teammates Shane McElrath and Joey Savatgy when the team underwent immense changes mid-season and didn’t complete Monster Energy Supercross.

“Max was on our radar from the very start – his success in Europe speaks for itself,” said Martin Davalos, Fire Power Honda team manager. “Winning his class at the Motocross of Nations speaks to his talent and potential.

“Providing a platform for him to succeed in the United States is our priority now. We are entering the next three rounds of Pro Motocross with realistic goals, yet we know that he has already got the speed to be comfortably inside of the top 10.”

Fire Power Honda – owned by Yarrive Konsky – has previously been a Supercross-only team since entering the US in 2020, initially focusing on 250SX East in Supercross this season. Along with its US and Australian commitments, it’s also expected the team will enter the World Supercross Championship (WSX).