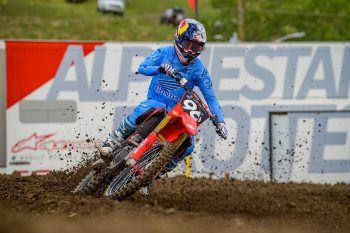 Team Honda HRC’s Hunter Lawrence achieved a season-first 250MX race victory at Thunder Valley as he adopted a ‘send it’ approach to secure the early lead in moto two.

A poor start in race one in Colorado left the Australian to work his way forwards from P7 at the end of the first lap, ultimately finishing fourth.

Determined to make amends in the second moto, Lawrence stormed to take the holeshot and didn’t look back, notching a commanding 5.5-second victory to land second overall in round three and keep the pressure on brother and teammate Jett Lawrence in the championship chase.

“It was a good race,” Lawrence recalled. “The first one, I was kind of frustrated with myself because my start didn’t give me the best opportunity to be where I wanted. The second one, I was pretty much like, ‘screw it, I’m just going to hold it wide,’ and it worked out really well.

“Trying to get rid of this cold, we didn’t do any laps or such during the week—just worked on starts and different clutch delivery and stuff like that. The first moto I didn’t give it enough rpm, and the second moto, I said, screw it, I’m just going to send it.

“I held it wide, and it worked out pretty good. I got out of the gate, and I’m like, ‘I don’t see anyone—it’s like a dream!’ I was like, ‘alright, I feel trash, but I can’t drop the anchor.’ I pushed as hard as I could, and it wasn’t too bad. I haven’t had a holeshot outdoors in a long time, so it was good; it made it easier. We’ll keep working on it—hopefully two more holeshots next week.”

The next stop on the Lucas Oil Pro Motocross calendar is High Point this Saturday, which marks round four of 12 in the 2022 season.