Overall winners Roczen and Lawrence recall third round in Colorado.

It was another strong round of 2022 Lucas Oil Pro Motocross for Team Honda HRC at Thunder Valley, as Ken Roczen clinched his first 450MX overall win of the season and Jett Lawrence pushed through sickness to make it three in a row in 250MX. Both riders were available to the media after the races for this Debrief feature. 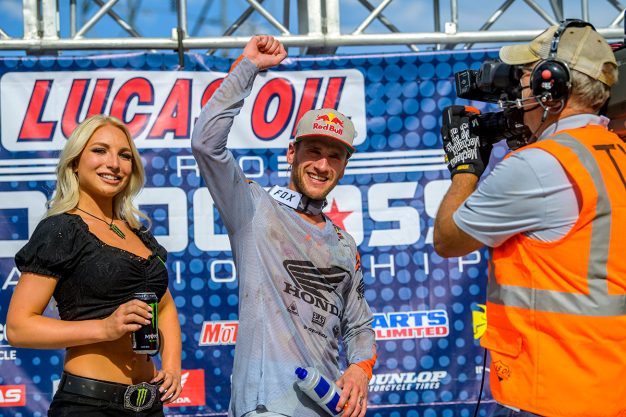 Today, both motos, silky smooth, calm, cool and collected. It was very technical today, tell us your side of it.

Obviously, I’m really happy with how today ended up. I’m getting better, I’m not the fastest out there, but I’m applying myself and I try really hard and stay in it. It seems like halfway, or somewhere around there through the motos when I start hitting lappers, I’m searching a little bit and I’m losing a lot of time. Once I get passed, or I make a mistake and I get passed, I kind of find myself and charge forward again. So, I’m going to have to work on that to not get out of the flow like that. We always have little improvements to do, but I’m super happy with what we’ve done this weekend. This win feels… obviously, Chase [Sexton] went down so it was kind of given to me on that point, but I also had to battle really hard with Eli [Tomac] to stay in that second place which also wouldn’t have happened. I just got rewarded today and I’m taking it.

You looked extremely fresh as you made your way to the podium. I know you had a lot of adrenaline flowing with the win and all that. Did you feel better than you thought you would? Did you feel the heat as much as you thought?

I actually thought we got pretty lucky today with the weather, but I feel physically pretty dang good, compared to what I’ve been in the past. I’m building every weekend, and try to be smart with everything, and get better. I’m just having fun with everything right now and trying to figure out these little pieces,  it’s probably the most fun I’ve had racing. Even when last weekend wasn’t that great for me, I still enjoy trying to figure stuff out.

Well, it’s obvious, because you always look like you’re having fun on the bike. This weekend you just looked exceptionally smooth and very precise this weekend, just wanted your thoughts.

My second moto especially I feel like I had some really good lines. I definitely need to work on getting everything a little bit smoother, but everything is always a work in progress and nothing is ever perfect. I’m good with where we’re at right now.

We’re in the first round where there was really some heat, elevation, we always question where you’re at, and you really proved today that you’ve got it, man. How do you feel now, do you still feel like you’re still at 100 percent?

Don’t doubt me! [laughs] Like I said, I felt really good physically and I’m doing everything I can during the week, off the bike, on the bike, to feel better and get better. I’m also mentally in a really good, content spot, that helps out a lot. For it being a hotter race today, plus that altitude, that means something as well so I’m taking this in the bank and yeah, I’m ready to get into the humidity.

There was a specific moment when you and Eli were battling, as you were going up the start stretch, Kenny, you almost seemed like you went wide on purpose to let him by because you had the line, and darted back on the inside. Was that intentional?

I try to let instincts take over, and I had to ride defensively, which gave us the gap to Chase as well. I honestly messed up, I was not comfortable after the finish line in that section – I was so damn slow and I always ended up on the inside. I knew he was on the outside sweeping it and carrying more momentum, so I was just trying to play and see what my instincts were doing. My whole thing is not giving up and that’s what I did.

About three laps in a row, you and Eli, up the first turn drag, up the start straight, you guys were just tire-to-tire a couple times, he would go inside, you would protect in the deep stuff. About three laps to go, you guys were almost side by side, you looked to the inside but he wasn’t there, he had drifted to the outside. Did that catch you by surprise a little bit?

Yeah, I was ready for him to square up and that’s why I looked over my shoulder real quick, because there are some riders that just will square up and take your front wheel out, and I know Eli is not like that, but we’re racing hard. I didn’t know if he was left or right, so I had a quick peek over the shoulder and I wanted to be ready for whatever he was going for. 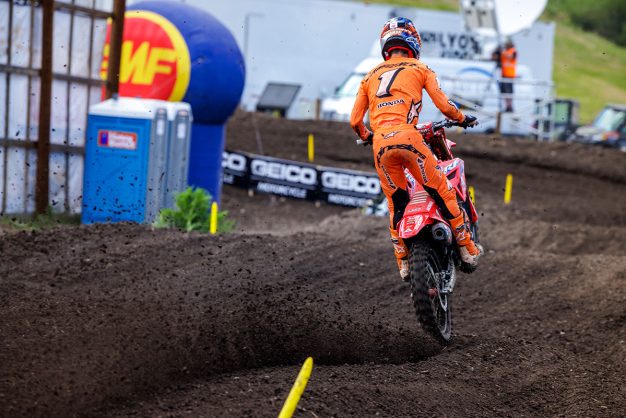 Jett, you did what Jett does, you went out and you put in good, consistent laps, showed the speed when you needed to. Give us your thoughts on it.

It obviously helped getting really good starts today and I didn’t think my sprint speed was that great today, because Levi [Kitchen] and Hunter [Lawrence] both motos gapped me. I put a bit of a charge to see if I could maybe break them. I knew Hunter was going to be a little bit harder because of his fitness, but we both did the same thing. So, it was kind of seeing where he was at but Levi was a little bit of a new one because I haven’t got to race with him much in front of me. Even in amateurs, I didn’t get to race him much at all, so it was kind of the first time getting to see how he races. I had probably four or so laps when I tried to see if I could break him, because sometimes once you get that second maybe, they start to try harder and they make a few more mistakes. Realistically, I’m pretty sure he ended up dropping it even more and ended up pulling out. So, I ended up going, rightio, I just got to keep a second here and just make sure I get another good start in the second one and hopefully get a win or something like that. He ended up pulling out a holeshot and I’m like, this is going to be a fun one trying to get around him.

It kind of looked like at the end of that moto, everybody in your class was like, we just got to get through this thing. I didn’t feel like anybody was really pushing forward, it was just like, let’s maintain and get it over with. Was that the case for you? Was it elevation, heat? The conditions this weekend were probably the worst of the three so far.

Yeah, I hate to keep using the sickness, but obviously the altitude is a little bit more but I feel like I didn’t feel it as much because last year I felt fine here. I think it wasn’t the altitude, it was more so this sickness. Just trying to get rid of it because Hunter and I, this week we didn’t do much, we mainly did starts. I think our bodies are just working twice as hard, you could say, during the moto because it’s fighting off this sickness and then riding also. So, it’s a lot on our body, which is annoying because obviously that first moto when Levi was out front, I wanted to keep on pushing and really make him earn that win. But I just got to 15 minutes and I was like, my arms felt like they started not to be there, so, it sucks. I’m hoping this week we can finally get rid of this cold. It’s been a pain in the butt. As of right now, I think I’ve just got to say this sickness is really kicking my butt.

You’ve been sick this race and the previous race at Hangtown and you’re still winning. So, what does that do for your mindset moving forward? You’re winning even when you’re sick, so how is it going to be when you’re well?

As of right now, I think it’s just getting lucky, I did put myself in pretty good spots on the start where my fitness is good enough where I can get to 15 minutes and then just ride like I would do for a 40-minute moto. Just use the least amount of energy as possible. So, I’m definitely excited to get back to 100 percent without this sickness, because we see how it went at Pala. So, it will be a lot nicer to get rid of this cold so at least I can fight like that first moto and second moto I was kind of like a sitting duck. I got into second and I was just sitting there like, I had nothing for Hunter or Levi just because once I got into second around 15 minutes, I was pretty spent. So, it would be nice to finally get rid of this cold, it’s been a pain in the butt, for sure.