Star Yamaha to keep LeBlanc in for Pro Motocross season 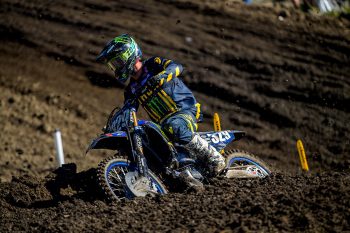 The teenager joined the squad with a wealth of amateur success to his credit and originally was set to contest the opening two rounds of the series at Fox Raceway and Hangtown.

LeBlanc started the year 20th overall at Pala with a 20-17 scorecard and improved at round two to land P14 with 18-12 scores. Most recently at Thunder Valley, he notched 10-9 finishes for eighth overall which highlights the improvements made while competing at a professional level.

“It was a good day and a big step in the right direction,” said LeBlanc. “We went 10-9 for eight overall today. We’re learning every time we go out there, and I’m happy with the improvements.

“I’m excited for the rest of the season. It was kind of my goal to prove that I should be here for all 12 rounds. I accomplished that, and now it’s time to keep this thing going. I’m looking forward to High Point next weekend.”

Monster Energy Yamaha Star Racing 250 manager Jensen Hendler added: “Our rookies are also making a lot of progress. Matt LeBlanc ended up going 10-9 for eighth overall, which is awesome. We’re three races into the championship, and it just shows that his heart is in it.

“He’s doing everything he needs to do to be a frontrunner, and with a little bit of time, he’ll be there. We’re happy with his performance and the progress he has made and will be keeping him in the Pro Motocross Championship for the rest of the season.”

Nick Romano joined LeBlanc in stepping up to 250MX with the Star Racing outfit this year and is 11th in the standings as the series moves to High Point this Saturday for round four.