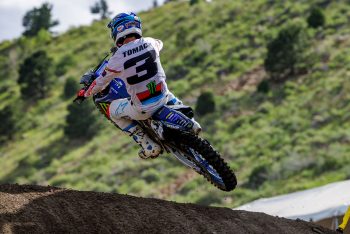 Monster Energy Yamaha Star Racing’s Eli Tomac suffered from brake fade in the late stages of the second 450MX moto at Thunder Valley which severely limited his bid to get the upper hand on Ken Roczen for the overall.

Tomac opened round three of 2022 Lucas Oil Pro Motocross in fine form as he took the first moto victory – his second win of the season – before he was left with seemingly no front brake at the conclusion of moto two.

“I was going at it with Kenny [Roczen] there, and probably with five or six laps to go my brakes started fading,” Tomac explained. “With two to go, the thing was gone, that’s why the last lap I was completely gone, out of the picture.

“That was a bummer, I don’t know if it would have changed on pass attempts or anything, but good thing is we were able to get second overall on the day. I feel like I’ve been improving, but we’ll keep going from here.”

Like in 450SX earlier in the year, Tomac has improved throughout the first races as he builds a platform to enable a consistent and front-running charge throughout the season. One development was the switch from hybrid (air/spring combo) to air forks ahead of the second round of 2022 450MX where Tomac credited his second moto win to bike improvements.

“We made that change between round one and round two, and for me, it’s like, ‘it either works or it doesn’t right’?” he added. “It’s just a feel thing, for me, that system is better for in motocross.”

The number three is third in the 450MX standings, 14 points back from red plate-holder Chase Sexton. After a relatively quiet start to the season with a 7-4 scorecard at Fox Raceway, Tomac landed his first Pro Motocross race win this year at Hangtown and backed that up with second overall at round three despite the moto two issue.

High Point this Saturday provides the next opportunity for Tomac to secure his first 450MX overall with the Monster Energy Yamaha Star Racing Team.