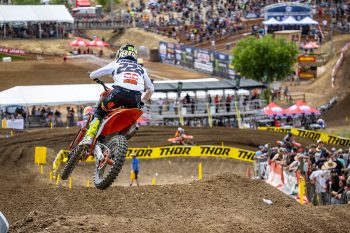 The 36-year-old traded positions with Red Bull KTM teammate Ryan Dungey to go 7-6 for sixth overall at Hangtown on Saturday, but is motivated to improve on those results after entering an additional two rounds.

“We improved a little bit from last week, so I’m pretty happy with the result,” the Italian reflected, notably taking the holeshot in moto one. “We still need to work a little bit on the speed in the first laps of the race. The first three to four laps, I cannot really get in the rhythm.

“After 10 minutes of the moto, I feel like I can stay there. I feel that we improve every week and we try to improve the bike also. We got some testing in last week and this coming week we’re going to do some more testing. Hopefully we can improve another little bit before the next race.”

Cairoli’s entry into Pro Motocross has been one of the headline stories of 2022. He had retired from professional competition at the close of last year’s MXGP championship, only to make his long-awaited debut in America with a series of guest rides to open the season.