Welcome return to the top for Seewer in MXGP of France It was a welcome return to the top step for Monster Energy Yamaha MXGP’s Jeremy Seewer in France, showing strong pace to capitalize and take the overall as Tom Vialle extended in MX2 thanks to a vital race one victory that secured the round win.

It was a dramatic start to the opening MXGP moto, as a turn one crash took down key championship contenders such as red plate-holder Tim Gajser (Team HRC) and Maxime Renaux (Monster Energy Yamaha MXGP) who won the last round in Spain.

Seewer took the win in race one, with a P2 in moto two enough to secure him the overall ahead of Red Bull GasGas Factory Racing’s Jorge Prado who posted a consistent 2-3 scorecard.

Glenn Coldenhoff (Monster Energy Yamaha MXGP) recovered from ninth in the first race to secure an impressive victory in moto two, elevating him to third overall for round 10.

Gajser recovered to fifth in race one before a fourth in moto two landed him P4 for the round – equal on points with Coldenhoff – as Ruben Fernandez (Honda 114 Motorsports) completed the top five with 7-5 results.

Looking at the 2022 MXGP World Championship standings, Gajser continues to lead on 438, with Renaux in second on 365 and Seewer third with 339. Leaving France, Vialle heads the MX2 standings with a nine-point advantage over Geerts, as Laengenfelder sits third, 104 points from the red plate. 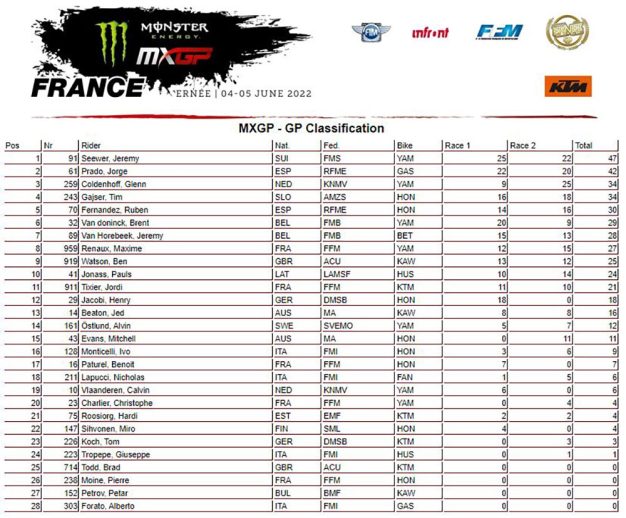 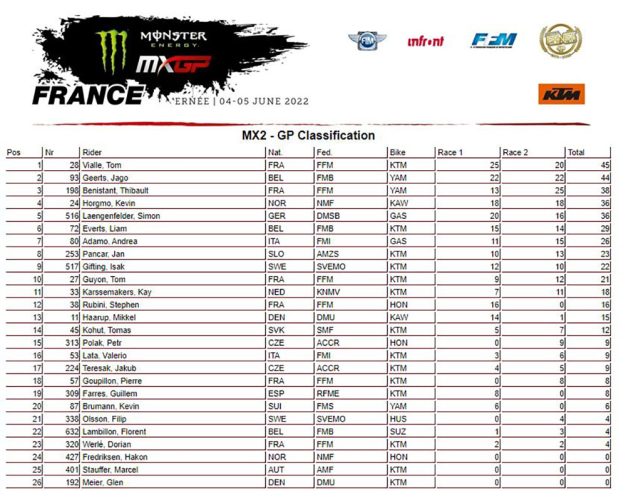