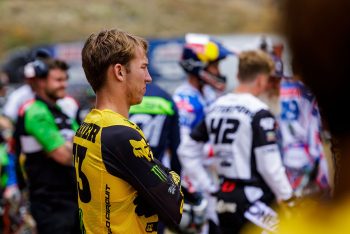 Monster Energy Kawasaki’s Austin Forkner has been forced to the sidelines once again as a shoulder injury sustained in preparation for the 2022 Lucas Oil Pro Motocross Championship requires a reparative procedure.

The 23-year-old opened this season’s 250MX with a pair of sixth-place finishes at Fox Raceway, before the latest announcement marked the second time he has been forced out this year. His 250SX campaign was shortened when he broke his collarbone at Arlington.

A statement from Kawasaki read: “Due to a shoulder injury sustained during preparation for the 2022 AMA Pro Motocross Championship, Monster Energy Pro Circuit Kawasaki’s Austin Forkner will meet with medical professionals to undergo a reparative procedure. Forkner will be sidelined from racing as he makes a full recovery.”

It’s another disappointing setback for Forkner, who was looking to graduate to the premier 450 class next year and have a clean run to build towards a 250 title charge. It is unclear when the number 33 will make his return to competition.