Craig Dack Racing and Rick Ware Racing the latest to be confirmed. 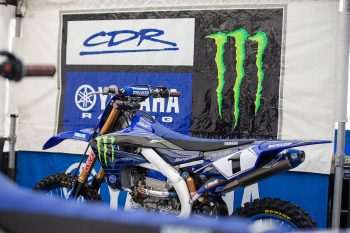 With MotoConcepts, Pipes Motorsports Group, Bud Racing and Team GSM already confirmed last week, CDR and RWR now make it six teams of the 10 that have been revealed ahead of the pilot series later this year.

As the factory Yamaha 450 team in Australian motocross and supercross, CDR has long been recognised as a world-class operation with an extensive list of championships in both disciplines. A former racer himself, Dack also spent time managing Yamaha of Troy in the US two decades ago and was instrumental in Chad Reed’s early career.

SX Global, the Australian company spearheading WSX, announced CDR together with American team RWR, which also has experience in operating a supercross program in the late 2000s. It currently competes in a range of top-tier motorsports series within North America.

“Aside from operating and competing at the highest levels of the sport, the addition of Dack’s Monster Energy Yamaha team expands the international relevance to our backyard where we have a storied history of popular supercross events in Australia,” said Adam Bailey, managing director – Motorsport of SX Global.

“While also bridging across the broader realm of prominent American auto racing through Rick Ware’s history in NASCAR and IndyCar racing. It’s incredible to see the intensive demand for these exclusive licenses with teams at the highest levels of competition, and with the sophistication and commitment to support and sustain a truly global championship.”

SX Global president Tony Cochrane commented: “Our ambitions and plans have faced incredible skepticism, but for those that have doubted us or continue to do so, we hope this line-up of credible, powerful teams and owners speaks volumes to our ability to bring this championship to fruition at the level necessary to give fans across the world a truly top-tier global supercross offering.

“What may be most valuable to us is the strength that each of these teams brings our series through their spirit of partnership – that shared vision and commitment to global success is extremely powerful and will drive us forward in the years to come.”

Over the coming weeks, the WSX four remaining licensed teams will be announced, completing the exclusive 10-team field. A schedule for the four-round pilot series due to drop the gates in September 2022 is yet to officially surface.