Runner-up encouraging for Roczen while building

So far, so good for returning Team Honda HRC mainstay on return. 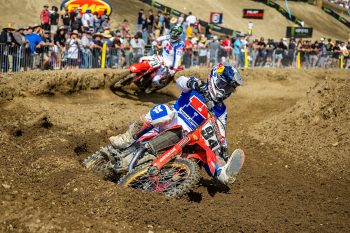 A relentless Ken Roczen was able to lead his share of laps and challenge Team Honda HRC teammate Chase Sexton for victory upon return at Fox Raceway, his runner-up result marking an encouraging outcome on Saturday afternoon.

Roczen missed much of Monster Energy Supercross after battling ongoing health dramas, but proved yet again that he will be a factor in Lucas Oil Pro Motocross by going 2-2 at the opener.

“Overall, I didn’t really know where I was going to be at,” reflected Roczen post-race. “My head is in it and I try to prepare as well as I can – this is a very good weekend to build on. I’m glad to battle with Chase today. Obviously he’s super-strong and fast right now, so for me I just want to have that never give up mentality and I fought hard today.”

The decision of Roczen to withdraw from Supercross 10 rounds in sparked concerns that his career could be over once and for all, but instead, he used the time – as usual – to regain fitness in a bid to bounce back and rebuild to 100 percent.

“When I stopped racing Supercross, I feel like everything got worse until it got better,” he added. “Honestly, it always sounds like there’s a lot of time, but there really isn’t. I was getting a little bit worried that I was going to come into the season too under-prepared.

“But that at the same time, once my head and everything was in it, I did everything I possibly could to get myself as good as possible. It was great to see that it paid off today and I think I can still build on it.