Overall winners Sexton and Lawrence recall the opening round in Pala.

It was a commanding opening round of 2022 Lucas Oil Pro Motocross from Team Honda HRC’s Chase Sexton at Fox Raceway, delivering a perfect scorecard in 450MX, as teammate Jett Lawrence started his 250MX title defence in the perfect way with 1-1 results. Both riders were available to media after the race for this Debrief feature.

It looked like at any given time you were able to just change lines. You were just kind of having a good time there it seemed like early in both motos. Where do you close the gap at will, it seemed like? And your pace was extremely impressive today, it seemed like you used a little self-restraint or self-control and put a lot of thought into each of the moves.

Yeah, my first moto start was not good, it actually helped me out, though. I found a few lines early and that led to me kind of being able to catch back up and make a pass on Eli [Tomac]. Kenny [Roczen] and I had a couple of close moments, him and I came together. Last year when I got around him, I over-jumped that middle jump by it felt like 35 feet into the bumps. It was a little bit squirrelly for me. Good thing Kenny didn’t go to the inside because I was coming in there hot. So, besides that second moto, I knew Kenny was going to be good, I got the holeshot, but he’s so good early, his line choice is second to none. He obviously got by me and then I was just talking to him about it, I just followed him and picked up some of the lines that he was doing that I was losing time, and then part of the track I was really good on as well. Just kind of connected those lines and ended up making a push back to him. It was just cool. He and I have ridden a lot of laps together and it was just a fun day overall. To have one and two for Honda is awesome.

Your bars almost come out of your hands. Two Hondas out here one and two and they’re going to take each other out. What went through your head?

I was committed to going to the inside, he saw the lap before I almost made a move there and he guarded the inside, I was already committed. I ran pretty much into the side of him. I backed off obviously because I didn’t want either of us to go down, so yeah, it was good racing. Obviously, we raced each other clean and we came a little bit too close for comfort there, but overall, it was just a great day of racing. Just happy to get out of here. Like Kenny said, the track was tough, those rollers after the start, I had a little bit of a close call second moto where Kenny almost crashed the first moto. Tough track, and overall, just in a good spot.

We saw a lot of your social media, saw a lot of your preparation coming into this. A lot of locals also said you counted some laps out here leading up to this round. You were up here late in the day when the track was rough and not in the best of conditions and really put in the time and made yourself suffer leading up to this. It obviously paid off today. Was that goal to just push yourself to that limit each day training?

Yeah after Salt Lake City in supercross, we went back to Florida, and I tested that week with Honda. Made some really good adjustments and I’ve been riding at Tyla Rattray’s track, his track is I would say the closest thing to a GP, as far as it looks. Just super rough and a lot of sand, which I struggle in. Got the bike to a really good spot. It’s honestly the opposite, kind of its little sister. Then put a lot of motos in, the week after that did some 40’s and just worked my butt off. I only had one week of real preparation and then last week came out here and rode press day, I felt good. Was good that the bike translated to the track and I got another day in Thursday and it led to this race.

Obviously, this is a huge day for Honda as a whole. Is it almost surreal to be battling your teammate and not really having anybody close behind and just kind of focus on each other like that?

Yeah, I’m not sure if Honda has went one-two in both classes before, both motos, I don’t know if that’s a first or not. It being a Honda event and 50th year for Honda in motocross this year is cool. We had the retro theme today which was awesome for those guys in the top step in both classes. Racing Kenny, I knew he was going to be tough that second moto. Last year here I had a really good first moto and he went out and just destroyed everybody the second moto. I knew I had to get a good start and I knew he was the guy I had to beat second moto. So, it was cool, like I said, we’ve done a lot of laps together. It was just fun. We’re going to race each other clean and not pull any cheap stuff out there, it’s just good, clean racing.

Chase, 1-1 today, fantastic effort and it’s a work in progress. You’re going to have a good time with the Honda camp tonight. Memorial Day weekend. You guys are going to get a small break and then get back to work.

Yes, sir. Last year for me in outdoors was tough, I feel like I was better than what I performed at. Just wasn’t really comfortable on the bike and that led just to not really doing that great. So, to have a really good two off-weeks after supercross and to build coming into this race and have it payoff is awesome. We’ll celebrate tonight, but after tonight it’s in the past and focus on the future. Hangtown is coming up and we’ve got 11 more races. It’s going to be a fun summer and hopefully we can do this again. 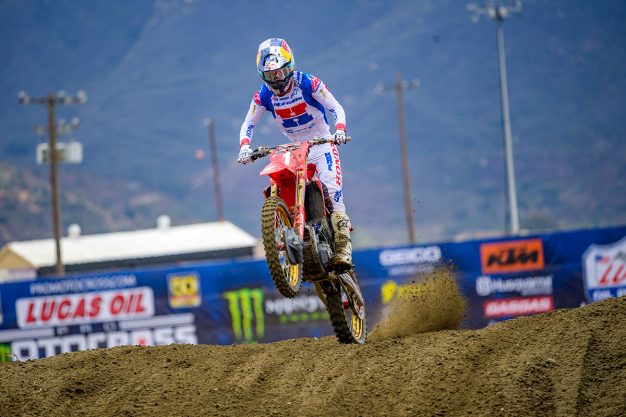 Jett, you got a second place-start in both motos, looked so close in that second one. You guys were almost side by side. You did get inched out by [Nick] Romano in that second one, was that a shocker to see the rookie up there out front?

No, not really, every now and then you get a little lucky, the blind squirrel finds an acorn. Those bikes are pretty fast, so it helps. I was pumped, going second, second on both of the starts, that’s like a holeshot for me, I feel like. First obviously I had Justin and at the start, like you said, I was kind of a little bit playing around, just kind of seeing where I could get him and then I found the spot. I was getting him in that same spot the last three races we’ve had there. It’s kind of like my go-to spot almost for passing Justin [Cooper]. Then Romano was able to find a few laps behind, but I think it was maybe fourth or fifth, I was able to find a spot and then capitalize on it. Then from there, it was almost difficult because I had to set a pace where I could last the whole race and not make any mistakes. It was hard because I had no one else, I got a bit of a gap and then you’re riding by yourself. So, you kind of get a little bit bored and that stuff and I made a couple of mistakes but was able to bring it home safe.

Once you had the gap, how hard was it to concentrate then? You’re trying to maintain pace, trying to hit your lines. You don’t want to cross the line by any means and make a mistake, so almost just as hard to concentrate when you’re out there by yourself?

Yeah, for sure, I always would know where most people are. I could see Jo and Hunter in that second one, so, I kind of always have that still bit pushing because obviously I can see where they’re at and when I gain on them, so I can kind of set my pace off of them and kind of just go, okay, I can do this pace and it can stay the same, or when they pull me it’s like, I’ve got to get going again. It definitely gets a little boring sometimes, especially when we do it early. That’s how all the race feels so long, like the first one with Hunter and I because we’re clicking off similar lap times. Then I was getting bored, I’m pretty sure he was also but I’m pretty sure he had RJ right there, he said. It was good.

I’m not sure if you looked at the lap times or had a chance to yet. Your consistency was incredible, lap after lap after lap for 30 minutes, extremely impressive. To watch you do that and work your way through traffic, when we look back at it, it looked almost effortless. Did it seem that way at the time?

I mean no, for you guys it looks effortless, but I’m definitely giving it a lot. Focusing a lot and really focusing on hitting my lines and finding my lines and then finding the flow of those lines. That’s what I have fun with because I can find a good flow and then I can just kind of play with the track and go from there.

Jett and Hunter, it’s a huge day for Honda. I was just wondering what it’s like for both of you to come back and see the smiles on the team and know that you guys both gave them that result?

Basically, what Hunter said, mainly they sacrifice so much to help us, and it motivates us as riders to make sure we do them right and the team. I think it’s just awesome. Even as brothers to go one and two it’s even cooler because that’s what we dream about. It’s like, it would be so cool. I remember talking about it, I can’t remember when but we were like ‘that would be so sick and an overall if we went one, two.’ We didn’t really care who won. It would be cool if Hunter went one and then I went second, or vice versa, so it’s kind of cool, it’s a bit of a goal that we’ve had in our head as brothers with racing. Obviously, the team is super pumped, and they were able to do it in 450 also, so it was an awesome day for Honda.