Winning the opening round not everything for Star Racing rider. 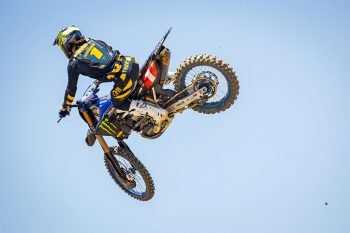 Following a challenging Monster Energy Supercross season that ended prematurely with a wrist injury, defending 450MX champion Dylan Ferrandis has hit the reset button ahead of this Saturday’s opening round of the Lucas Oil Pro Motocross Championship.

Ferrandis stormed onto the premier class scene last year, winning the first round at Fox Raceway on debut and ultimately captured the title with a round to spare at Fox Raceway 2.

The Frenchman was unable to translate that form into 2022 Monster Energy Supercross and scored a best result of third position in San Diego, later making the decision after Detroit to withdraw from the remaining rounds in order to fully recover ahead of his outdoor defense.

“I saw everybody riding during Supercross and I wasn’t able to finish the season, so for sure I missed that,” Ferrandis reflected. “But at the same time, it’s a new season, all the points are back to zero, everybody’s reset, so I think it’s important to do a little bit like last year, step-by-step, weekend-by-weekend and don’t try to absolutely win the first round.

Ferrandis was a model of speed and consistency in his maiden 450MX campaign last year. While Ken Roczen was unable to carry his early-season form throughout the season and Eli Tomac’s late charge was too little, too late, the number 14 was solid throughout to convincingly take the crown.

With Tomac making the move to Monster Energy Yamaha Star Racing for 2022 and entering the outdoors off the back of winning a second 450SX crown in commanding fashion, the intrigue continues to heighten surrounding a potential title battle between the YZ450F teammates this season.