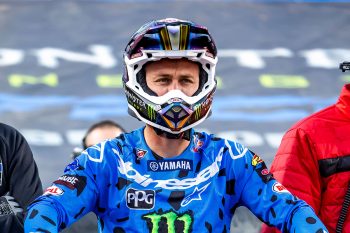 Monster Energy Yamaha Star Racing’s Eli Tomac has declared that he will enter the 2022 Lucas Oil Pro Motocross Championship at ‘close to 90 percent’ despite sitting out media day at Fox Raceway.

Tomac injured his MCL at the 14th round of 2022 Monster Energy Supercross in Atlanta and made the decision to sit out the Salt Lake City finals after clinching the 450SX title with a round to spare in Denver.

Less than a month has passed since Tomac last lined up at his home round, however, he will benefit from recent seat time in preparation to bid for 450MX title number four and his first outdoor campaign onboard the YZ450F.

“[The knee has] made good ground and improvement,” Tomac explained. “On healing, I would say I am probably close to 90 percent. I’m basically not feeling it at all while riding – I would have to catch it in a weird way for it to be an issue.

“The past two-three weeks, it has been making good progress and I was definitely lucky to be able to take off Salt Lake there, let it heal for a few more days and slowly work back into the motos.

“Obviously Dylan [Ferrandis] had a strong platform last year and this bike seems to be totally fine in motocross – if not better – and an easier start compared to supercross. I think we are going to be right in the game right away and it’s been really nice.”