Odd process that led to Husqvarna riding remaining in 250MX. 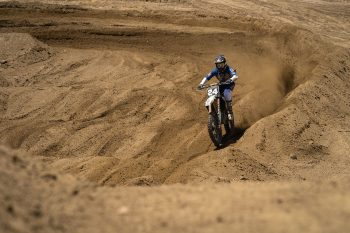 A late decision led to RJ Hampshire remaining in 250MX for the upcoming Lucas Oil Pro Motocross season after he outlined the odd process that almost saw him transfer to the premier class full-time outdoors.

Hampshire, 26, received a call to potentially fill-in for Rockstar Energy Husqvarna teammate Malcolm Stewart and spent a week riding the factory FC 450 before it was determined he would stay down.

It was widely expected that Hampshire would be riding 450MX in 2022 until a final shakedown on both bikes at Glen Helen early last week saw he and the team ultimately opt to challenge for the 250 class title in which he finished fourth last season after winning RedBud.

“I was a 450 guy for about four days…” Hampshire confirmed. “I got the call last week – actually two weeks ago now – and we heard Malcolm [Stewart] was going to be out for a little while. How the contracts are set up, we needed two 450 guys to go.

“Yeah, I was all for it, rode Malcolm’s bike a couple of times in Florida and I was like, ‘hey, I need to come out and get a setting’. Tested Monday, Tuesday at Glen Helen, felt really good, felt awesome actually and did a moto at the end of Tuesday. When we finished, it was like, ‘alright, sweet, we’re going racing on this 450’.

“We happened to bring the 250 out that day and before we made our minds up, we wanted to kind of see how we were on both of them and within four laps I was pretty dang close to the same speed on that as what I was on the 450.

“We kind of came together as a group – Austria, KTM, Husqvarna, the whole team – and felt like for the brand, our best bet is to stay down on 250s and really have a fight in us. It was cool, I showed my value and worth on the 450, was excited, but we can only control this year. My contract is to race a 250, so I’m ready to go out and give my all on this.”

With Stewart currently recovering from a knee injury sustained late in Monster Energy Supercross and Dean Wilson still on the sidelines, Rockstar Energy Husqvarna will open the 450 class with Shane McElrath for at least the first four rounds of Pro Motocross.