Recognized for its ultra-competitive, ‘Ready To Race’ pedigree, high levels of anticipation have surrounded the new generation 2023 KTM 450 SX-F and it certainly hasn’t disappointed, as we experience it for this Tested review.

Boasting a host of updates, KTM’s premier class challenger features an enhanced engine, frame, suspension and electronics package to increase its capability straight out of the crate. A more extensive rundown on its tech features is in Detailed.

KTM has been working on this new bike for many years now and focused on improving all the little things needed from the previous models. Engineers did a great job and I was lucky enough to be able to test it at RedBud, which is my favorite track in the country.

Revamped from top to bottom, the visual improvements are significant. The new model has a whole new look, with notable streaks of purple, as well as a striking, enhanced plastics design that makes a powerful impact.

The bike still feels skinny and streamlined, but the grip between the legs is great while riding – you can leverage the bike well. The front shrouds are cut differently and have more grip, so in the corners you can get your leg up high and almost rest it against the top of the shrouds without catching. 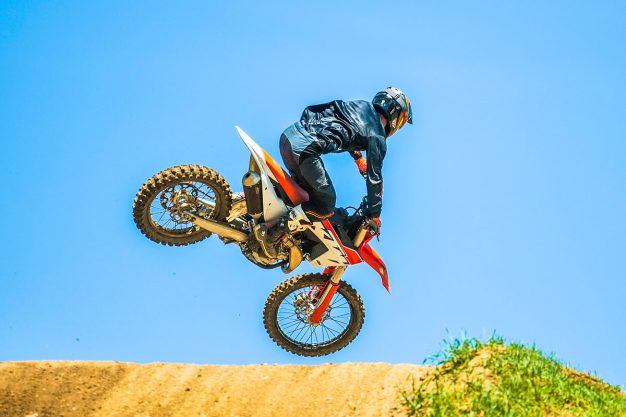 The side number board has opened up greatly, enabling more ventilation and air-flow through the bike, allowing for more consistent power. One of my favorite parts about the new look and feel of the bike is the feel is the new seat and seating position.

I found it so easy to get in the position on the bike I was comfortable with and, where I was seated, I felt extremely planted and didn’t find it hard to get into position for different parts of the track.

Another huge difference for 2023 is the engine package, as the latest 450 SX-F has a great amount of power and feels extremely fast. It actually took me a little while to get used to, that general delivery and strength of the motor.

You can feel the electronics with the bike too, as when you rev it too long in one gear, the engine would only let you rev it so high, which encourages selecting that next gear. Launch and traction control are again true and highly functional features that you will find benefit in. 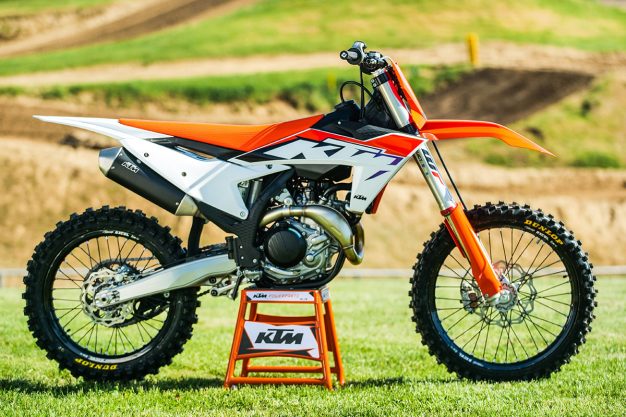 The mapping on this new model is a big change. With three maps available, I first rode in the aggressive map, which was just too powerful. The most consistent map was map one, smooth and enabling me to ride with that added bit of aggression.

The gearing on the 450 is right on and the gearbox is very smooth through the gears, but the bike definitely likes to be ridden in a taller gear, while not being overly aggressive. Shift up and let the motor work for you and that’s where benefits will be evident.

Another interesting addition to the 450 SX-F is the quickshift option, which can be switched on or off. I could see it being an aspect that a lot of riders would like – not having to roll off to change gears – but with my muscle memory set with ‘manual’ shifts and clutch control, I preferred it off.

Regarding the chassis, the frame feels more rigid and stable on the 2023 model – stability being a key factor at speed with these new editions. KTM worked on the sub-frame, allowing it to have more flex where it’s needed, but also not to bend as easily in terms of damage, making it more resilient when crashed.

Another noticeable difference came with the new footpegs, since they are bigger and wider, which provides more surface area and definitely makes a difference to the feel of the bike under your feet – feeling that extra bit of control.

One of the biggest differences I found between the previous models compared to the new bike is how balanced and stable the 2023 machine feels. The stability of the bike under load and on straights is solid, while in the corners, the bike feels planted. In the beginning, I found it hard to get the bike to turn how I wanted it to, but the more I adapted to it, the greater confidence I had to make it turn and find the sweet spot. 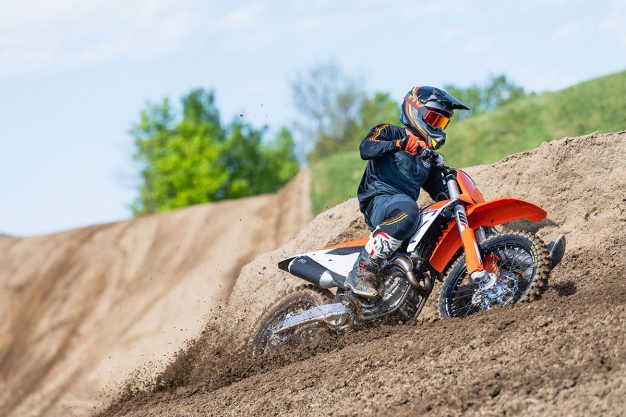 In the past I have struggled with the feel of the stock front forks and this year KTM has made big changes to both the fork and the shock. The WP forks have all-new settings and I noticed I had a lot more feel, much more predictable than before. KTM also added a hydro stopper for the last bit of travel of the forks, which makes the bike more forgiving when hitting a big jump or coming into a section really hard.

The WP shock is really impressive too, feeling really plush, yet predictable and smooth. A new addition for the shock is that you can adjust the pre-load, compression and rebound all with your hands and don’t need any tools to make changes, so that’s a bonus when chasing that optimal setting.

I can’t fault the Brembo braking system on the 450 SX-F. Braking is extremely sharp, but provides a bunch of feel in that transition from hard braking to reducing pressure while trailing into the turns. It’s that type of feel that inspires confidence and helps you to ride better as well.

The 2023 model KTMs again came out with the Dunlop MX33 tires, which are always a winner. They work great in almost all conditions and are a reliable, competitive product. You’ll enjoy them and chances are – depending where you ride most – that you’ll stick with them upon replacement also.

Overall, KTM has made a huge effort to make the new generation of bikes incredible, straight out of the box. They have made great improvements all-round from the previous models and have not taken any shortcuts.

The 2023 KTM 450 SX-F is a bike that caters to more advanced or bigger riders than can really control a 450, so while it is very powerful, it offers high levels of control to complete a truly enjoyable ride. I’m excited to see what the broader public’s impression is upon release. 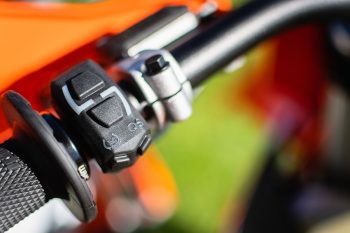 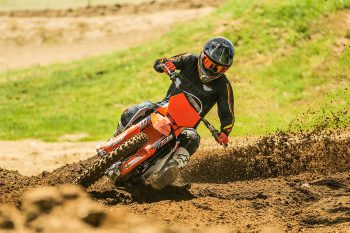 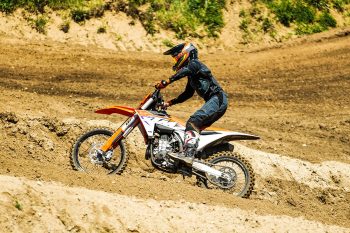 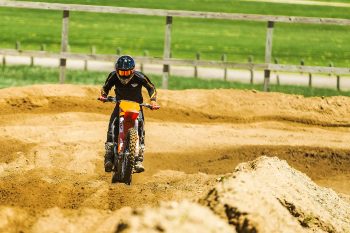 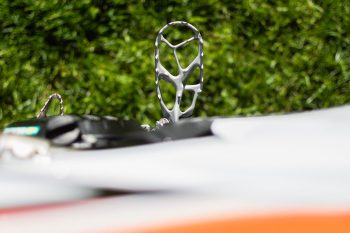 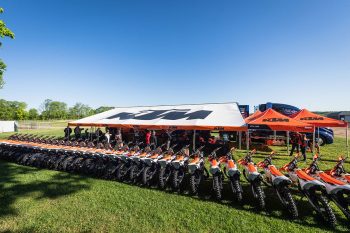