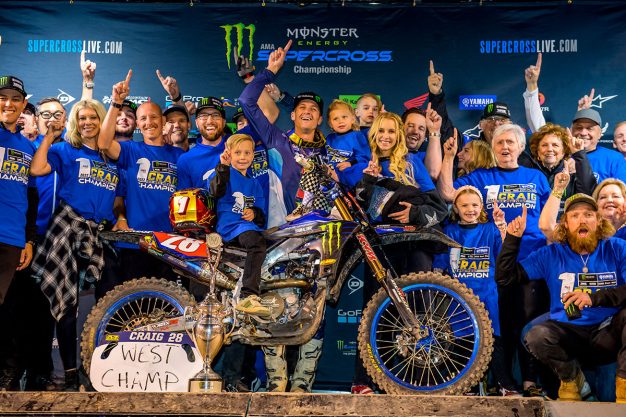 Christian, congratulations. You’ve dealt with a lot of pressure, especially over the last month… you’ve been hearing about it non stop from media, fans, friends and team, I can only imagine. Now that you’ve got it, just take me through what you feel like now, that is it all done and you’re a champion.

It doesn’t feel real, I can tell you that. I do feel like I’m in a dream for some reason. This all just seemed impossible just like two years ago – it all seemed so far away and unreachable. I saw so many of my teammates accomplish this, I went through it with Chase [Sexton], Colt [Nichols] and Justin [Cooper], so many people and I’m like ‘my time is coming, my time is coming’. I kept digging, I kept grinding. Yeah, I’m older in the class and whatnot, but I’m here now. I’m thankful to be in this position. It’s a dream come true for a lot of riders, our goal. Obviously, we want to be champions in the 450 class, too, but this is something special and it starts with my family. Going through it, ups and downs, injuries, the FIM situation I had a few years ago. I was ready to hang it up a few years ago, I was ready to hang it up from everything going on, but my team believed in me and we’re here. I couldn’t be happier.

It’s been awesome to see. Talk about the nerves today because you’ve been saying all day ‘I’m calm, I’m good’, so now that it is over, was that the case? Were you pretty strong?

I was in a good spot. I had a lot of family surprise me and that could have added pressure, but I was just so calm in my position. I had an 18-point gap and I just needed to get 14th, but so much stuff had to happen in practice just to get to the main. Dylan Ferrandis showed up after one of the practices and he surprised me, he was like ‘I’m here for you, let’s go do this’. That was cool, we had fun in the rig in between practices. He’s been [in this position] three times and I think that just kept me calm and confident with myself. It was fun, I felt like I rode good until the main when I tightened up. I was behind Hunter [Lawrence], I was like ‘let’s stay here’, then Nate [Thrasher] blew by me and it was a cool main event until I tucked the front. Then I kinda freaked out – I knew what spot I was in and what spot I needed to be in. From there I just rode it out. It’s a crazy feeling, for sure. A lot of pressure the last month and I feel like I’ve handled it pretty well.

I want to ask you about back in 2013 and 2014 when you took a little hiatus from the sport. You did eventually come back and make a full-time return to racing, but when you think back to that time, when you did decide to come back, what was your realistic expectation of how a second career would look like? And how does that compare to where you are now?

Yeah, a lot of people know I stepped away due to injuries, went and got a real job, then I talked my father-in-law into letting me come racing again because I still had that fire burning. This was kind of the goal. It was, ‘hey, I can win’. I got people to believe in me and I believed in myself, got a ride. A lot of ups and downs between then, but my family never stopped believing in me and that’s why I’m here today, that is probably the biggest reason. Everything plays a part. My trainer, the team I’m on, Bobby Regan taking a chance on me… When he signed me, I wasn’t putting in good results, I don’t know why he took a chance on me, but he saw something. He was like, ‘we’re going to make you a champion’. That kind of instilled in me and then watching my teammates do it, I believed in myself. It takes a team for sure, to get here, you can’t do it on your own. Got to have family, team, support and people that believe in you.

As one of the more experienced guys in the class and to see you get to this level and reach this achievement, how have you learnt in recent years to put it together to earn the championship that you won tonight?

A lot throughout the years, but the main one was last year. Winning the opener and having the red plate, I was like ‘okay I can do this, I can be in this position’. That kind of took me to that next level. Then Colt [Nichols] and Justin [Cooper] doing it and me training with them every day, in the gym, at the track, having the same trainer, it was like ‘I can do this next year’. It was kind of make of break for me. Deep down I’m ready to go 450, I’m happy to say that I am going to and that was my last 250 race. I bet on myself, make or break, whatever happens, happens. 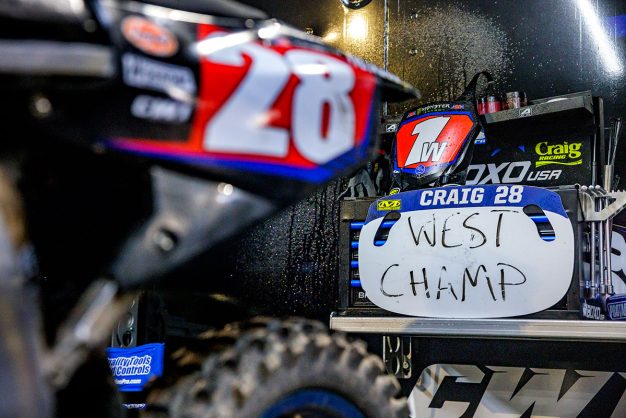 I’m sure there’s probably a ton of messages on social media, you hear people say, ‘oh, you just ride around in 14th tonight, no big deal’, but you guys don’t ride like that during the week, the intensity is different, you don’t ride to just ride around. Can you tell us how difficult it is to not put yourself in zone and want to race up front?

Yeah, after last week they did all the math and they were like ‘you can go throw whips and finish 14th’, but there’s a lot of stuff in between there that can happen. Practice crash, something dumb, you can fall over. Like what happened today with Jett [Lawrence], little things like that. You can’t just go around and just expect it. I kept that in my head all week, but let’s get through practice and the heat race and then we get there. I think that goes back to my mentality now with my mentor I would say, Connor Fields, working with him he’s helped me grow into the person I am today and really helped me believe in myself.

When you look back at your career, even all the houses you have lived in, throughout California to Florida. Was there ever a moment in time where you thought this situation would be possible at this age? Is this something that could only happen in the short term, with things lining up perfectly the way they have these last two years?

Last year I re-signed with the team and it was a one-year deal. We had to pack up and move from California to Florida, on a one-year deal. That was stressful. I’m going all in, I’m going to get this and I’m going to do it right. That’s a lot, growing up in California, we are signing a one-year deal, we are going to move to Florida, buy a house, move the kids there, they go to school there full-time. My family believed in me, it was like’ alright let’s do it’. I knew could win, I knew if I could put the puzzle together I would be here today. Looking at this now, it was worth all that stress.

We’ve seen so many riders in the position you used to be in. Speed, talent, ability, maybe winning here and there, but couldn’t put the pieces together to get the title or even be in contention year in, year out. What was the process like to fix the weaknesses, because that’s the hardest thing, right?

Yeah, I think it’s just being real with yourself. I have a lot of talent and I have some strengths on the track, but I also have a lot weaknesses. It was like sitting down with my trainer and pointing out those weaknesses. We built a turn track at the farm, ‘alright, let’s get your corners better’. That was one of my weaknesses. Just like things like that, building on that stuff. Having my teammates there and building off each other, I wouldn’t be here without all of them. I’m speechless still, it’s a cool feeling and something I’m going to cherish forever.