Domestic and international coverage set for 50th anniversary in 2022. 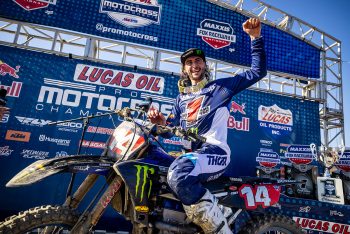 MX Sports Pro Racing has detailed a comprehensive broadcast schedule for the 2022 Lucas Oil Pro Motocross Championship, with every 250MX and 450MX moto of the series’ 50th anniversary to be showcased live via telecasts on MAVTV Motorsports Network and NBC TV Network for the first time.

Additionally, the subscription-based MAVTV Plus streaming platform will broaden the reach of American motocross and bring the world’s most prestigious off-road motorcycle racing to an eager international audience.

The coverage on MAVTV plus will likewise feature live and on-demand action of all 48 motos from the 2022 season, with access in more than 22 countries via smart TVs, streaming players, and any mobile device.

“It’s taken a lot of hard work and patience to bring our US-based fans the coverage they deserve, but the time has come,” MX Sports Pro Racing president Davey Coombs explained.

“We’re beyond excited to know that Ferrandis supporters in France will be able to watch their countryman chase history to become the first multi-time French champion, and the same can be said for everyone down in Australia who want to be a part of the next chapter of Lawrence’s superstar trajectory on the sport’s biggest stage.

“In addition to that, we’re honored to welcome the passionate enthusiasts in Italy, who are particularly savvy motorcycle racing viewers, as they cheer on Cairoli’s American journey and the extension of his iconic career.”

MAVTV will provide live coverage of all four motos from nine events during the 12-round 2022 championship, and in total will air 45 motos live over the course of the summer.

MAVTV will also feature primetime two-wheel programming on Tuesday nights, including re-airs of all four motos from each round of the 2022 Lucas Oil Pro Motocross Championship. Check local listings for air times.

Pro Motocross fans can get an exclusive $10 discount now on a new MAVTV Plus subscription, using the code: PROMX10. Subscribers are able to watch the championship live or through on-demand replays.