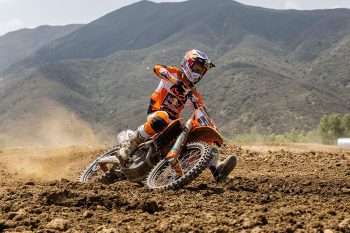 The returning Ryan Dungey is ready to extend his comeback to include all 12 rounds of the 2022 Lucas Oil Pro Motocross Championship, the Red Bull KTM rider indicating that he is committed to a complete 450MX campaign.

Dungey previously announced that he would contest the first two rounds of this year’s outdoor’s series, however, has now provided further detail on his return that could see him compete in every round this season.

“This first thing that came to mind was, ‘let’s do four or five races, that would be kind of cool’,” Dungey explained on this week’s PulpMX Show. “Then I got to thinking about it… racing, unless you are all in, it’s hard. Of course, we are going to do the first two and then if things go good, then we want to continue that down the road.

“For me just having the long term of it, mentally all into it, as well as physically, that’s the safest way in my opinion. I want to go out there and compete for wins, that is my goal. It is a tall order, but I think the biggest thing for me right now is putting in the time – the physical prep, the motos, the intensity and the speed and everything like that. I don’t know where I stand.”

Dungey last competed professionally in 2017 Monster Energy Supercross, in which he won a fourth-career 450SX title before announcing his immediate retirement prior to that year’s Pro Motocross series.

The three-time 450MX title-winner will be joined by MXGP legend Tony Cairoli and Aaron Plessinger at Red Bull KTM for at least the opening two rounds, as Cooper Webb recently confirmed that he will sit out 2022 outdoors altogether.