Multiple 250MX race-winner returns to squad once more on 450. 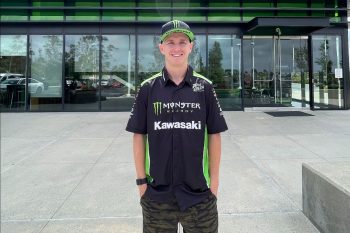 Monster Energy Kawasaki has confirmed that Joey Savatgy will contest the 2022 Lucas Oil Pro Motocross Championship with the squad, effectively filling in for the injured Adam Cianciarulo.

Cianciarulo injured his ACL early in this year’s Monster Energy Supercross Championship and has not yet announced a return date to the competition.

As such, the vacant seat in the team for 450MX was filled by Savatgy, who himself was injured earlier in the season in 450SX before his team at the time, Rocky Mountain ATV/MC-KTM-WPS, crumbled.

“It’s a privilege to join the Monster Energy Kawasaki team for the upcoming Pro Motocross Championship,” Savatgy explained. “I’ve had a lot of success with the team in the past and I’m eager to continue building on that in the coming months.”

“We’re only a few weeks shy of the season opener so we will aim to progress as the season goes on, but I’m confident my familiarity with the bike and the team will help speed that process along. I’m optimistic about what we can achieve together this summer.”

Savatgy returns to the Monster Energy Kawasaki team after a two-year hiatus from the outfit, where previously he achieved 450SX rookie of the year in 2019 and finished his debut 450MX campaign in 11th later that season, notably missing the first four motos. He also won multiple 250MX races with the brand earlier in his career.

The 2022 Lucas Oil Pro Motocross Championship commences at Fox Raceway on 29 May, which marks round one of the 12 round series.