It was main event victory number seven in 2022 Monster Energy Supercross for Jason Anderson at the Salt Lake City finals, as Nate Thrasher ended his 250SX West season on a high taking the win in the Shootout at Rice-Eccles stadium. Both riders were available to the media following the race for this Debrief feature. Jason, incredible finish to this championship. There’s a lot to race for, we talk about pride, ego, money, all those things. How about messaging? Is this a good way for you to send a message going into outdoors and into 2023 that you are back, all the way back and maybe even better than ever?

Yeah, personally, it’s huge for me just to be in the position I’m in, to have the momentum I have. To be honest, over the past few years, you get insecure. You don’t really know if you’ve got it. It’s tough whenever you struggle. Being right here, I’m thankful but at the same time, I just want to keep progressing and be able to come back next year and I really want to make some more runs at a championship. I think I’ve got it in me. I guess if you look at statistics, I guess the clock is ticking with age, but anything is possible. Let’s go for it.

Based on the way you’ve carried yourself the last couple weeks, if somebody was to basically look at the statistics, like you have the most wins you’ve ever had in the season, but you lost the title. I would never guess it by even looking before you went up and sat there. I don’t know if I’ve ever seen you this happy, this much enjoying what you’re doing. We’ve talked about it in a lot of press conferences, but what has gotten you to this point? What has basically put a smile on your face where maybe some guys would be disappointed that they didn’t pull it off this year?

Yeah, for me, it’s nice to be in this position. I want to prolong my career, even when I was struggling, I didn’t want to stop racing. Results like this help you keep a job [laughs]. It’s enjoyable to ride up front, but at the same time I’ve got to stay on my toes. My personal life is amazing right now, just between everything I’ve got going on there. I switched up my program, I’m back home in New Mexico where I grew up. I think that’s a breath of fresh air for me. Obviously, you’ve heard it a million times but new team, I’m in a good spot. I’m enjoying it. That’s key. I think that’s underrated in our sport. I think a lot of people feel like you have to go to Florida or whatever, and Florida is not bad. It’s not a bad thing, but I just wasn’t very happy there. I just had to switch a couple things up and luckily it worked out, but you’re never that sure until it happens.

You’ve tied Eli for the number of season wins. With the title decided already, was there any greater or lesser motivation to win tonight? What helped you catch fire so badly late in the season?

Obviously, I’m motivated and after winning a few in a row I really wanted to make it four in a row. It’s really cool. Before this, I’ve only won two in a row, so being able to have those streaks, they’re some cool things, cool achievements to have for your career. It’s obviously good momentum going into next year. As for what has changed, I don’t think much has changed. At St. Louis, I was kind of under the weather with being sick and I felt like I was kind of decent there, but then at Atlanta I started getting some momentum. I made some bike changes, but nothing crazy. I think it’s just sometimes things start clicking. I had been doing the work and honestly just trying to progress every day, whatever it is. Even when I’m on the track, whatever the number is I’m out there. I just want to keep progressing and keep learning and keep that goal inside, more so than the number. It’s nice to be able to get some wins and get those streaks, it’s pretty incredible. 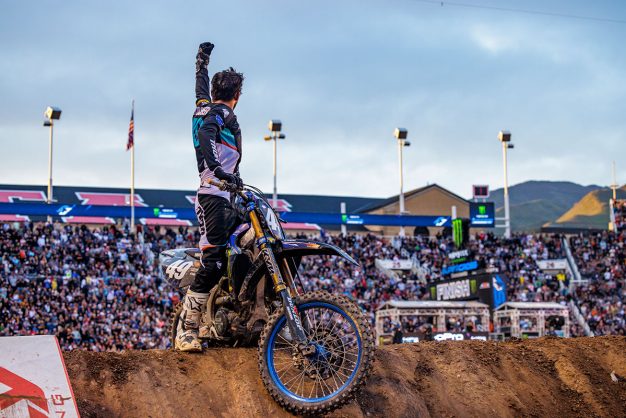 Nate, that was a great ride. I want to go through the race a little bit with you. Early you were super aggressive. We all could tell what you wanted. You got up front. Then near the end, Hunter starts coming back on. What were you feeling say four, five laps from the end? A couple mistakes in the whoops. Just want to know what you were thinking and processing at that moment to help close it out.

I made a big mistake in the whoop, my hand fell off. I had like a three-second lead at that point and I was just trying to maintain that. The track got really tricky at the end. The whoops got beat down pretty good and I think I didn’t move lines in the whoops quick enough, so that kind of hurt me a little bit. Then I just made three big mistakes in three laps in the whoops and he closed in quite a bit. I just tried to ride defensive at that point. Just too many mistakes in the whoops really cost me. The track was tricky. I felt like I rode a good race in the beginning. I felt like I had really good speed in the beginning. Midway through I felt like I managed it really good. Then at the end, I kind of didn’t get really tired, but just the altitude got me a little bit, I think.

You’ve been visibly frustrated at times this year because the speed has been there, you’ve had great rides, but just putting it all together was hard. What was it that made tonight come together like that? You pretty much executed everything. Did something change, or was this just the night that it all glued together?

I think like you said it just kind of all glued together. The season has not been my best, which all you guys can tell that. I haven’t had good starts. I’ve been 15th, 16th off the start and you just can’t do that, you just can’t do that when these guys are so good. You have to be up the front, which I haven’t been, so that’s a bit of a main key there. Then when I have been up front I just haven’t rode my best. I don’t know if it’s just nerves. I don’t really think it’s that, but it may be. I finally just felt good tonight on the track. The track was difficult. Our bike is really good here. I just felt like I could get it off to a good start and I could just put my laps in, and that’s what I did. I felt like I did a good job of that tonight.

What changed for you this week? It hasn’t been an ideal season, and to come out, the intensity, the pace you had early, was I’ll admit, shocking to watch, in a good way. How good does it feel to be no longer known as the speedway guy? I know that is something that has chased you around since your only victories have been in Atlanta?

It felt good. Last year, I kind of struggled all year besides Atlanta. This year I felt like we have been pretty good all year, we’ve had podium speed at most rounds and just haven’t put it all together. But tonight, I finally did. I had not my best qualifying, really didn’t feel that comfortable on the track. The track was pretty hard-packed and not really my style. Once they watered it pretty good, it got pretty rutty for the main event, and I feel like that plays into me. Feel like I just came out swinging early in the main, I had good speed in the beginning and tried to break away in the beginning as fast as I could. Once I got the pass made, I knew I had to run away because these guys were behind me, and they weren’t going to let me win t easily, and they didn’t. It was a great race.

With you, three wins on your career. That’s an astounding number considering it’s only your second year in. Aside from the shoulder injury that you had last summer, do you feel you’re better than you were before then last year? Just everything that you’ve learned an on the bike experienced now that you’re on the team?

Yeah, definitely. We didn’t have a good off-season this season. We were planning on doing East Coast and some things got shuffled around, so I had four weeks on the bike coming into the West Coast. My shoulder was still kind of bugging me through the first four rounds. Just didn’t have the strength built up. I could only get about seven laps out of it and it would kind of go away. So, I felt like those first six races were really tough just because they were so close back to back. We didn’t have a week break, so there was no way to build strength in it because you have to rest during the week to go back racing on the weekend. So, that was a really tricky thing we had to deal with. Then I felt like once we got to that break, I felt like I could go in the right direction. I felt like Seattle was a good race for me. I was battling for a podium and ended up going down. Then Atlanta I came from way back and got fifth. So, I felt like there were some positive trending, and then Denver wasn’t good. We just put our head back down and came in here just wanting to do the best. We knew Christian had to get 14th or better, but my job was just to go out there and win the race and that’s what I did.

How were you playing it on those laps when when you were behind Christian? It was clear you were a little bit faster than him, and Hunter was getting away. I’m sure you didn’t want to mess with the teammate for a title. How did you play all that?

I felt like two or three laps before, I felt like I had the speed to make a pass, but it was tricky because he was pushing the limit, too. It was kind of hard, I didn’t want to go in and run it too deep in the turn to make him go down or anything, so I just kind of stayed behind him a little bit and then I got past him. Then I felt like I had the speed to go chase down Hunter in the beginning of the race. I got around him. He kind of moved over a little bit once I had the line. Just tried to run down Hunter and then once I got around him, I just tried to check away. At the end, just too many mistakes. He made a good race. Kudos to him.