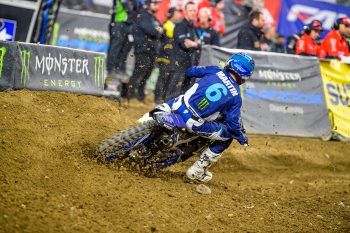 Jeremy Martin will join the Muc-Off FXR ClubMX team for the 2023 season with the target of being crowned champion in 250SX, and securing a third 250MX title.

Martin will make the move from the Monster Energy Star Yamaha Racing team, bringing an end to the tenure with the team that began last year.

“As you can imagine, it was a difficult decision with all the offers on the table,” Martin explained. “I am familiar with the ClubMX program and it has been growing at a good pace for a reason.

“Their bikes are on point and I have a good comfort level with Brandon [Haas] and the crew. The main deciding factor for me is the ClubMX facility itself. What most people don’t see or know about are the ten tracks, the training program, the fitness program, all top-notch.”

Muc-Off FXR ClubMX team owner Brandon Haas added: “Bringing a multi-time national champion to our team takes us to a new level. I have known Jeremy for a long time and have a great deal of respect for his attitude and work ethic.

“He is the perfect fit for our style of racing and will lift all aspects of our program. He’s a grinder. He just puts his head down and does the work with no flash. He doesn’t need a spotlight on him – he just wants to win.

“This may or may not come as a surprise to the industry but it ultimately makes sense. On one side, Martin has the experience to know what he wants in a bike and a team and now he gets to call the shots and make the decisions on what direction to go.

“On the other side, the team has been growing at a rapid pace and was in line to capitalize on the next big opportunity. Together they will help each other achieve their goals of winning.”

Martin won back-to-back  Lucas Oil Pro Motocross 250MX championships in 2014 and 2015 and has 20 career wins to his name in the category. The number six has also experienced success in supercross, winning five 250SX East races, with his 2022 Monster Energy Supercross campaign in the class brought to a premature end due to injury.