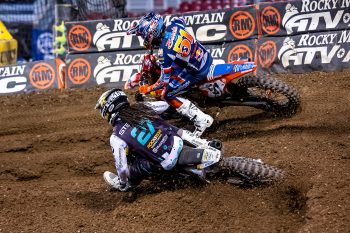 After being brought down spectacularly in Salt Lake City’s main by Justin Barcia, Malcolm Stewart moved to provide his opinion of the ‘dirty’ overtake that ruled him out of podium contention during the final round of the 2022 Monster Energy Supercross Championship.

Stewart was taken out by the TLD Red Bull GasGas rider mid-race after moving past him for third, the pair being two of three riders in contention for third position in the 450SX Championship.

“I was putting a charge in, and Justin just straight up T-boned me,” Stewart explained. “We’ve been racing clean all year long, and that was dirty, I will be straight up with him. I’m definitely going to have a talk right after this race, but overall, I’m here to have fun and I’m so thankful to get third overall, that is what counts and that is where the money is at.”

Stewart was later able to remount, finish fourth and secure third overall in the 450SX Championship, while Barcia crossed the line third, but was fined and demoted 10 points for the incident which ultimately regulated him to fifth in the final standings.

“It was a good battle, I was riding pretty tight and Malcolm was obviously riding a little bit better than me because he was the one all over me,” Barcia stated. “He went inside, I went double, single and charged in hard, and that was that.

“Not much to really say about it, we were racing for third in the points, and I wanted it bad. Maybe it was too much, but it’s how I race I guess, and it’s just kind of is what it is.”