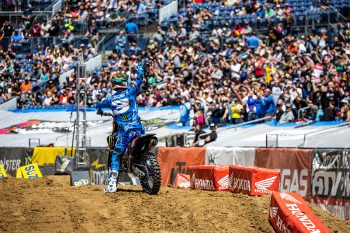 Fresh off of clinching his second premier-class title last weekend, Tomac put ink to paper today at the season finale in Salt Lake City. Only Supercross has been confirmed at this point.

“It’s very exciting news,” Tomac stated. “This year was basically a dream for me, being able to win as many races as we did and the championship.

“Initially, it was a one-year deal, so I’m really excited to go racing again in 2023. It’s a great team to be around. There’s nothing better than winning and we’re all looking to continue that.”

Ferrandis returns next year for his seventh season with the team, where he has enjoyed a stellar tenure with back-to-back 250SX West championships, the 2020 250MX championship and the 2021 450MX crown.

“I’m very happy to stay another year with the team that I’ve enjoyed all of my success here in America,” Ferrandis commented. “It will be our seventh year together and we definitely hope to have more wins and championships in the future.”

“We’re even more excited to go into next year with the same team and with number-one plates in the premier class of both championships. It’s good for the morale of the whole race team and is going to keep everyone focused on trying to achieve it again.

“Our number one goal is to have these number-one plates in the future. The whole team’s really excited and ready to prove to the world that we are prepared to do it again.”