Direct updates from round 17 of the season at Rice-Eccles Stadium.

Follow the 2022 Monster Energy Supercross Championship with direct updates from round 17 of the season at the Rice-Eccles Stadium through Racefeed. 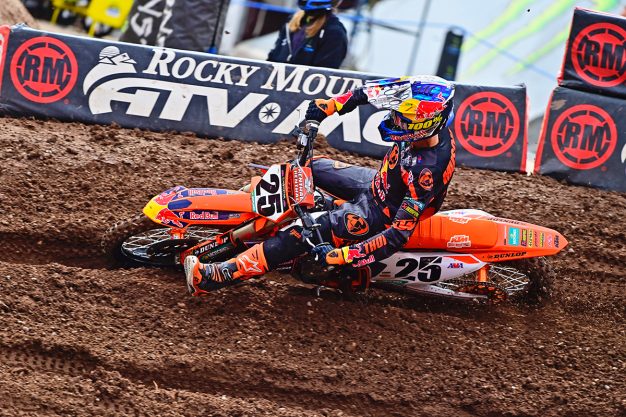 250SX West heat:
It was a perfect start to the night show for Craig as he got out front early and rode to a 6.340s victory ahead of teammate Thrasher, with Blose continuing his solid form in third position. Fourth came Shimoda, followed by Thury, Carson Brown (AEO Powersports KTM), Lawrence after going down while running in P5, Friese, Swoll and Mitchell Harrison (AJE Motorsport Motul GasGas). Mosiman was notably 15th position after a tough outing that saw him go down twice in the whoops section, forced to the last-chance qualifier.

250SX East heat:
The second heat of the evening was won by Forkner after making his way by top-qualifier Oldenburg on lap five, going on to win by 3.485s. They were another seven seconds clear on Lopes, who in turn was ahead of Smith, Jace Owen (Muc-Off FXR ClubMX Yamaha) despite injuring his nose earlier in the day, Marshal Weltin (Yamaha), Drake, Hampshire, Jarrett Frye (Firepower Honda Racing) and Max Miller (KTM). Brown went down early and was unable to make it any higher than 11th position, now also headed to the LCQ alongside teammate Mosiman.

450SX heat one:
Red Bull KTM teammates Musquin and Webb went 1-2 in the first premier class heat of the night. It was Webb who led for the opening seven laps until Musquin finally made his way by and went on to win. Webb was able to keep a fast-finishing Stewart and bay, with the retiring Brayton fourth, and Bloss fifth. Positions six through 10 were Bogle, Ryan Breece (Yamaha), Cade Clason (SGB Unlimited Honda), Bryson Gardner (Honda) and Kevin Moranz (KTM).

450SX heat two:
Off the back of three-straight main event wins, Anderson continued his run of form in the second heat race of the night to win by 1.555s ahead of Barcia, who was directly ahead of Sexton. Fourth was a solid result from GasGas privateer Justin Starling, from Kyle Chisholm (Yamaha), Hartranft, Austin Politelli (Honda), Logan Karnow (Kawasaki) and Gared Steinke (Husqvarna), who is attempting to make the 450SX main on a two-stroke.

250SX main event:
Monster Energy Star Racing Yamaha’s Christian Craig was crowned 250SX West champion in a main event nail-biter won by teammate Nate Thrasher. With the western regional title on the line, it was Lawrence who took the holeshot and led the opening few laps, before Thrasher stormed to the front. That left Lawrence in second and champion-elect Craig directly behind him in third, which would be exactly what the latter needed to get the job done. However, things got interesting on lap six when Craig went down in the turn after the whoops, dropping back to fifth in the process – Shimoda, Forkner and Mosiman making their way by him in proceeding laps also. Up front, Lawrence kept the pressure on, but it wasn’t to be as Thrasher went on to hold on by 0.432s, with Brown charging to third position in his home race. Fourth was the end result from Hampshire despite falling on the final lap in the whoops, ahead of Shimoda, Forkner and Mosiman. Eighth place was enough for Craig to clinch, as Blose ended his career in P9 and Swoll completed the top 10.

450SX main event:
Another commanding ride from Anderson saw him make it four-straight 450SX victories to cap-off the season, 2.364s clear of Sexton, but much of the attention was on the battle for third. Barcia made an aggressive pass on Stewart in a move that ended up being for the final podium position. Stewart was able to claw his way back onto Barcia in the closing laps, but didn’t quite get close enough to counter. In the end, that was the podium as Anderson topped Sexton and Barcia, with Stewart’s P4 enough to secure third position in the final standings. KTM duo Musquin and Webb were next in line, fifth and sixth respectively, followed by the retiring Brayton in seventh to conclude his career. Eighth, ninth and 10th on the night were Hartranft, Starling and Breece.