Assorted racer comments following the 16th round of the season.

In Quotebook, a selection of riders detail how their races played out in the 16th round of the 2022 Monster Energy Supercross Championship at Denver. 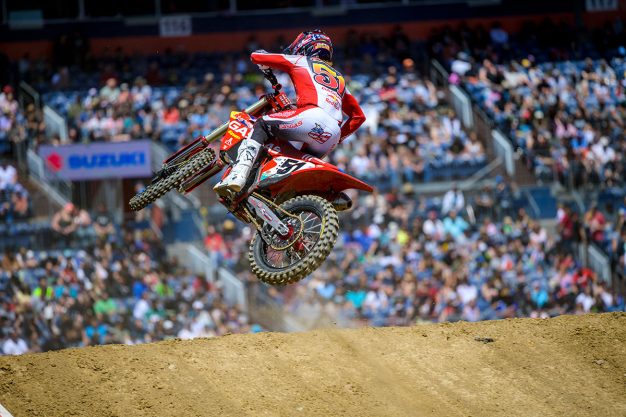 Marvin Musquin (Red Bull KTM) – Third:
To be honest, today was not my best ride but I knew the conditions were really tough today and I made the best out of it. I didn’t get a good start, I was in a very bad position, but I knew it was going to be tough and things would happen. I’m definitely feeling really good on the bike at these last few rounds, so thank you to the team!

Cooper Webb (Red Bull KTM) – Sixth:
Denver was an average day for me. I had a decent start in the main and kind of got pushed wide on the opening lap. I got up to sixth and I kind of stayed there the whole race. I latched on with the guys ahead of me and some guys went down and I made some passes. Overall, it was kind of a struggle of a day. The track was very dry and sketchy, so not ideal conditions, but we’ll give everything we can for this last round.

Jason Anderson (Monster Energy Kawasaki) – First:
I started the day confident about my experience on these conditions and ready to fight for the win. Although the championship is coming to a close, I’m still eager for more race wins. The track was tricky today and demanded a lot of patience so, once I got out front in the main, I really focused on hitting my marks each lap. While the hard-packed sections worsened throughout the race, I stayed locked in and had a lot of fun setting the pace from the lead. This was my sixth win of the season and I’m ready to go end it with another one in Salt Lake City.

Justin Barcia (TLD Red Bull GasGas) – Seventh:
A little bit of a difficult day. I had another really good start in the main and was having a really good race, charging hard and really close to the podium. Unfortunately, I had a crash and that was pretty much all the race wrote. I’m definitely disappointed in the day but definitely did a lot of great things as well. I had a lot of great starts today and I’m looking to bring those into SLC and get after that podium!

Chase Sexton (Team Honda HRC) – Fourth:
I qualified first again and won my heat race, which was good. I had a really good day going and pulled the holeshot in the main event but just made a dumb mistake – hit the little curb they had by the mechanics’ area and fell over. After that, I feel like I rode pretty good and made some good passes to get all the way back to fourth – not ideal, but it’s something I can build off of because I feel like I rode well after my little incident. I’m looking forward to having a good week and doing the final round in Salt Lake City.

Malcolm Stewart (Rockstar Energy Husqvarna) – Second:
I’m excited, that was a really big finish for me. For some reason, I always ride tracks really good in altitude and I felt really good about it. Even though we didn’t win, we got second and I’m third overall in the points now, which the end-goal is to be third in points, so I’m excited about that.

Eli Tomac (Monster Energy Yamaha Star Racing ) – Fifth:
It was an unbelievable day and an unbelievable year. It was a season that I dreamed of happening, so for it to become a reality at my home race was super special. I’m just so proud of the whole team. All of the pre-season work that we did paid off and we had some great results in the middle of the season that made the difference – at one point, we had five wins in a row. It’s such a special year. This season was a revival year for me, so thank you, Yamaha, for making that happen.

Brandon Hartranft (H.E.P Suzuki) – 11th:
I felt really good qualifying, I think I was 11th, about 0.5 seconds off of fifth place which I’m happy with. The heat race went smooth, but in the main event, I picked a far outside gate just to get a good rut. But then I just butchered the start. It upset me because I knew I shouldn’t be that far back. I was in about 18th and then fought my way back to 11th. I’m not happy about 11th, but we’ll take the positives out of the day. We’re looking forward to the last round and I’ll fight to hold eighth place in championship points.

Justin Bogle (H.E.P Suzuki) – 21st:
Qualifying started out pretty well, I felt comfortable and got up to speed quickly. Then, it was not a great heat race. I had a fall, came together with another rider, and just barely made the main event. The main event was pretty much a wash. The silver lining here is we’re healthy and will go again next weekend in Salt Lake City and wrap this season up.

Adam Enticknap (H.E.P Suzuki) – DNQ:
I’ve been trying to work on my starts during the week and get it figured out, but I just haven’t found the right technique to get out of the gate. I went into the LCQ, I was around eighth and was moving forward. I made a mistake in the sand section. My rear tyre slipped out from under me. The track was really dry and hardpack, but it was on me. I was trying to get to the inside and make a pass and it just slid out from under me. After I crashed, somebody came up and hit me so that was the end of my night. Hunter Lawrence (Team Honda HRC) – First:
[Christian] was pulling in on me in some spots, and then I’d get out a little bit. It was shaping up to be good, but he ended up going down. I got a bit of a breather, and there was nothing more I could do for my championship hopes at that point; I just had to focus on winning the thing. The crowd was unreal; you could hear them every time something would happen. For Salt Lake, I’ve just got to try and make it five wins for the season, and that’s the best I can do, really.

Michael Mosiman (TLD Red Bull GasGas) – Second:
It’s so good to be racing here in Denver, and the fans are awesome! I got off to a pretty good start. Those guys were battling, I was battling, and it was a little bit of chaos out there. I was trying to watch out for the booby traps, but it was fun though! I’m just trying to focus on myself, taking what I’ve learned here and apply it next weekend. I’m looking forward to it.

Christian Craig (Monster Energy Yamaha Star Racing) – Third:
Denver went pretty well, overall. I qualified second and was only a tenth off, so I was confident heading into the afternoon. Then in the heat race, I got the holeshot and checked out pretty quick, which was nice. I just put in my laps and felt really comfortable and brought that feeling into the main event. I got off to a good start in the main and was running second, pressuring for the win, and then ended up making a small mistake in the sand and going down. I got up around seventh place and came through the pack to third and minimized the damage. I’m kind of bummed, but we’ve got to take it for what it is and move on to next week and get the title there.

Nate Thrasher (Monster Energy Yamaha Star Racing) – Ninth:
It was a frustrating race in Denver. I kept working on making my way forward but it was a tough track to make passes on and we ended up ninth. We’re going to keep working to get the result we are looking for and end the season on a high note next weekend in Salt Lake City.

Jalek Swoll (Rockstar Energy Husqvarna) – 10th:
Today was a step in the right direction in terms of comfort on the bike. I was towards the front way more than the back and I had some really good starts. In the main event, I hung in third for a little bit but just couldn’t find that pace and lost a few positions to sixth. On the last lap, I got caught behind a couple of lappers and they went like they’re going for the triple and backed out at the last second and I had nowhere to go, so I had to roll the triple and lost a ton of positions. That one stings, for sure, but we’ll come back and try to be a little bit better in Salt Lake.

Carson Mumford (BarX Suzuki) – 13th:
The track was super slick all day. That was my first LCQ of the year so I’m very glad to get out of that clean and also get the win. In the main, I came from very far back and ended up 13th. It’s not the best result, but I’ll take it for today.

Jo Shimoda (Monster Energy Kawasaki) – Fourth:
The early part of my main event was really good with all of the passes I was making to get up into third place. A better start would have made it much easier to get into the battle at the front but, I still had a chance at second or at least a podium finish. Unfortunately, I made a mistake and lost third pretty close to the end and that never feels good but, I fought back for the spot and I feel my racing was strong. I will aim for a podium finish next weekend in the Showdown at Salt Lake.