Direct updates from round 16 of the season at Empower Field At Mile High.

Follow the 2022 Monster Energy Supercross Championship with direct updates from round 16 of the season at the Empower Field At Mile High through Racefeed. 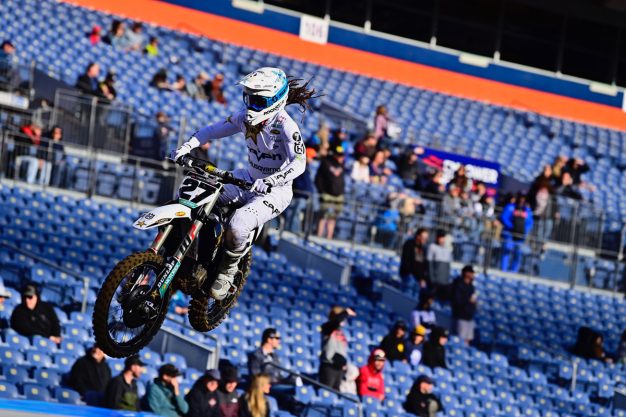 450SX qualifying:
Team Honda HRC racer Chase Sexton posted the quickest lap at the high altitude round at Denver CO. Sexton’s time of 44.624s edged four of the riders who pushed the lap-times down into the 44-second range, narrowly beating Eli Tomac (Monster Energy Star Yamaha Racing) as Tomac eyes up wrapping the 2022 championship at his home round. Monster Energy Kawasaki’s Jason Anderson finished third, despite crashing while on a charge on the final lap, ahead of Red Bull KTM pairing Marvin Musquin and Cooper Webb. Justin Brayton (SmarTop Bullfrog Spas Motoconcepts Honda) will get sixth pick of the starting gate for the night show, as Rockstar Energy Husqvarna’s Malcolm Stewart finished the session in seventh. Positions eight through 10 were filled by Justin Barcia (TLD Red Bull GasGas) and Justin Bogle (Twisted Tea HEP Motorsports Suzuki).

250SX West heat one:
Craig quickly jumped to the front of the pack out of the first turn, led by Dominic Thury (Yamaha), Jo Shimoda, Vince Friese and Derek Kelley (KTM). Craig wasted no time pulling out a comfortable lead as Shimoda slid into second, with Friese eventually finding his way past Thury as the clock ran down. Craig took a comfortable 10-second victory from Shimoda and Friese, ahead of Thury and a fast-finishing Nate Thrasher. Kelley crossed the line in sixth, with Jy Roberts (KTM), Devin Harriman (GasGas) and McClellan Hile (Honda) filling the remaining qualifying positions.

250SX West heat two:
Hunter Lawrence came firing out of the gate with the holeshot, ahead of Carson Brown (KTM) and Michael Mosiman. Mosiman made short work of Brown to move into second, but lost the front end and went down with two minutes left on the clock, allowing Blose and Marchbanks to get past. The TLD Red Bull GasGas rider quickly fought back to second, but the damage was done, with Lawrence taking an seven-second victory. Marchbanks rounded out the podium, with Blose and Swoll finishing fourth and fifth. Brown, Robbie Wageman (Yamaha), Mitchell Harrison (GasGas) and Ryan Surratt (Yamaha) also qualified for the Main event.

450SX heat two:
Chase Sexton clinched a near-perfect holeshot in the last of the heat races, leading Justin Barcia and Cooper Webb around the first lap. Jason Anderson then quickly moved himself into second, as Malcolm Stewart also got the better of Webb after several physical turns to muscle his way into fourth. Anderson closed onto Sexton’s rear wheel with two laps remaining, but despite his best efforts, Sexton took the win by a bike-length, with Stewart snatching third position from Barcia late in the race. Webb would finish fifth, ahead of Brandon Hartranft (Twisted Tea HEP Motorsports Suzuki), as Mitchell Oldenburg (SmarTop Bullfrog Spas Motoconcepts Honda), Ryan Breece (Yamaha) and Fredrik Noren (KTM) all qualified for the main event.

250SX West last chance qualifier:
GasGas rider Geran Stapleton took the holeshot of the 250SX West LCQ, with Carson Mumford (BarX Chaparral Ecstar Suzuki) in second. Mumford took over the lead with a couple of laps remaining to then take the win from Stapleton. Alex Nagy (KTM) and Brandon Ray (Kawasaki) would finish second and third after Stapleton was docked two positions for a racing infraction during the race, finishing fourth.

450SX last chance qualifier:
Cheyenne Harmon got the holeshot, but Justin Rodbell (Kawasaki) muscled his way into the lead on the opening lap, taking out Cade Clason (Honda) in the process with an aggressive pass. Kevin Moranz (KTM) caught and passed Rodbell late in the race to take the LCQ win, aheadAustin Politelli (Honda), Rodbell and Marshall Weltin (Yamaha).

250SX West main event:
Hunter Lawrence grabbed a narrow holeshot from Craig and the two set off with Jalek Swoll in third and Mosiman fourth. Craig shadowed Hunter and tried several times to make a move on the opening laps, but Hunter remained focused on the job at hand and maintaining throttle control on the hard-pack, slippery track. Just behind them, Mosiman blitzed past Swoll in the whoops for third and tried to close the gap on the top two. As Craig continued to turn the screws on Lawrence, the Yamaha rider went down entering the sand section in seventh. Lawrence suddenly found himself with a five-second lead over Mosiman and Shimoda and settled into a rhythm to manage the buffer, as Craig desperately tried to claw his way back up the leaderboard. After some back-and-forth with Shimoda, Craig stormed into a podium position with three laps remaining, but that was as far forward as he was able to go before time ran out. Lawrence claimed a five-second win to ensure the 250SX West title fight was taken to the final round at Salt Lake City next weekend. Mosiman finished second and Craig third, with Shimoda and Garrett Marchbanks completing the top five. Positions sixth to 10th were filled by Friese, Blose, Wageman, Thrasher and Swoll.

450SX main event:
Sexton edged Tomac for the holeshot with Anderson third and Brayton fourth at the end of the opening lap. Sexton made a big mistake and went into the tuffblocks and allowed Tomac into the lead just two laps later, and Anderson in second, trying to close the gap. The Kawasaki rider caught and passed Tomac, who then settled into a contented rhythm as the two continued to lead Malcolm Stewart, Justin Barcia and Marvin Musquin. Anderson put his head down and quickly stretched out a lead as the track continued to dry out, while Stewart made the pass on Tomac as he went into championship mode, eventually relinquishing any podium result to Marvin Musquin. Sexton, meanwhile, sliced his way back to fifth with five minutes remaining, before finding his way past a cruising Tomac as the laps ran down. Anderson took the win, from Stewart and Musquin, with Sexton in fourth. Tomac’s fifth-place finish saw him claim the 2022 450SX Championship, to the elation of the packed Denver stadium. Webb, Barcia, Brayton, Oldenburg and Politelli filled the remaining top 10 positions.