Assorted racer comments following the 15th round of the season.

In Quotebook, a selection of riders detail how their races played out in the 15th round of the 2022 Monster Energy Supercross Championship at Foxborough.

Marvin Musquin (Red Bull KTM) – Third:
I’m enjoying the riding with the new setup on the bike. The track was challenging but I enjoyed it. Towards the end of the season, I’ve been feeling pretty good and getting on the podium right now is huge. I had a bad start but somehow, in the first two corners, I gained some time. It was a long main event but I managed to be consistent and get third tonight.

Cooper Webb (Red Bull KTM) – Sixth:
Today was a bit of a tough day. In the heat race, I got a great start with a holeshot but my exhaust ended up falling off. I got another holeshot in the main event, which is really awesome, and I was able to lead a few laps and then got shuffled back pretty quickly and really just struggled after that. I kind of struggled with the track conditions all day but we left healthy and am looking forward to the last two.

Jason Anderson (Monster Energy Kawasaki) – First:
The track was really dry and rocky during the early parts of the day and made for some gnarly conditions in my Heat Race. Thankfully by the time the main event was underway, the track was starting to come around and I was able to string together a couple of solid laps to take control of the lead. With the Supercross Championship quickly coming to a close, I knew this win wasn’t going to be easy so I kept charging and defending the best I could. I’m really pumped to get another win this season, but I definitely couldn’t have done it without all the effort put in from my entire team.

Justin Barcia (TLD Red Bull GasGas) – Fifth:
It was a pretty good day. I was feeling good after practice, I made a few little changes and was comfortable on the bike. I didn’t really feel that great in the heat race; I didn’t get the best start and ended up fourth. In the main event, I came out of the gate okay but I rode a little tight in the beginning. I was able to put a really strong charge at the end, but I was only able to come back to fifth. We are looking for some fire going into Denver!

Chase Sexton (Team Honda HRC) – Second:
I was a little bit slow in the beginning, and then after Eli [Tomac] stalled it, I picked up the pace a little bit. I knew Jason [Anderson] was going to be good from watching him all day, so I knew if I wanted to win, I had to go with him. There was a part in the middle of the race where I felt like I was riding really well, and lapped riders were definitely a factor; it was just a yo-yo effect, and then obviously he broke away. My goal after Seattle – after weeks of me laying on the ground – was to get back to being on the podium. Now that I’ve done that, obviously I want to continue being on the podium, but my other goal is going for wins. I’ve been close, but Jason has been riding really well and so has Eli. It’s not easy, but I’m doing the best I possibly can. I feel like my riding and confidence are getting better every weekend, and that’s definitely going to help me heading to the outdoors. I just want to finish this season strong and go for these last two wins and have some fun. When you’re having fun, it’s easy to be comfortable and go fast. Overall, I’m happy with how I’ve been riding.

Malcolm Stewart (Rockstar Energy Husqvarna) – Fourth:
We did a lot of testing with the team this week, and I feel like my whole bike setup was definitely in the right direction. This race was an early one, so it’s always kind of different. In the main event, I started terribly and I kind of got pushed out wide and made a few mistakes. Marvin and I were kind of playing yo-yo and lapped riders on the track really came into play toward the end of the race. He got a little ahead of me, and I pretty much rode a quiet fourth.

Eli Tomac (Monster Energy Star Racing Yamaha) – Seventh:
It was a tough main event. I was up front early but stalled the bike and then I got shuffled back a little bit and ended up just kind of playing it safe. It was a tough track, one of the tougher ones that we’ve had to where the jumps and the bottom of the transitions were just really tough to ride, period. It was a track I didn’t want to take a whole lot of risk on. We’re still in a really good spot for points, and we’ll go clinch it next week in Denver.

Brandon Hartranft (H.E.P Suzuki) – 11th:
It was a pretty smooth day for me. I qualified 10th overall. The track was pretty gnarly, it was like sawdust out there. The dirt kept deteriorating throughout the day. It was especially bad on the jump faces. In the main event I had a great start and then going into the right-hander another rider just didn’t turn. He pushed me off the track. I was off the track for two straightaways before I could safely re-enter. I went from fifth on the start to way back. I rode a solid main, not the best and not the worst, and I ended up 11th overall. So thank you to the team for believing in me and working hard and I’m going to do the same back.

Justin Bogle (H.E.P Suzuki) – 22nd:
It was not the best weekend in Foxborough. I’m glad to get out of here healthy so I can finish out the next few weeks strong. 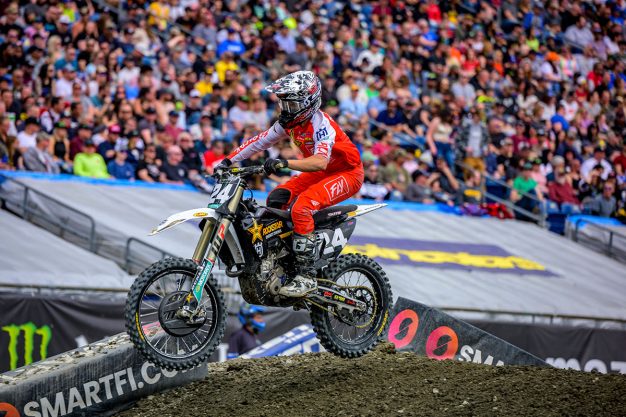 Austin Forkner (Monster Energy Pro Circuit Kawasaki) – First:
I had a little extra fire in me coming into Foxborough, especially after last weekend’s race. I felt my results didn’t show my true speed, so I came into this race super focused and ready to show everyone what I’m truly capable of. The day started off perfect with me sitting as the fastest qualifier. That was a big win for me mentally and got me fired up for the rest of the day. I definitely made things harder on myself with my Heat Race crashes, but I’m so proud for overcoming the day’s challenges and getting my first 250SX main event win of the season. Overall, it was an exciting night of racing for us and I’m ready to fight for another win when we head to Salt Lake City.

Pierce Brown (TLD Red Bull GasGas) – Third:
It’s a bummer that I couldn’t hold onto it, but all-in-all, I’m stoked on the ride and I’m just hungry for more. I wish I could have held onto it, but I’m not too bummed because I learned a lot out there and hopefully next time I can hold onto it all the way. I led a lot of laps tonight and hopefully this could jump-start me into a win here soon.

RJ Hampshire (Rockstar Energy Husqvarna) – Sixth:
Man, I had a really tough day. I had good starts again. In the heat race, I crashed right off the start when someone hit me and went to the LCQ. I got some more laps in the LCQ and felt really good in the main event. We were clicking them off. I definitely had a shot at that win, and had good speed to do it, but just happened to come together with Pierce with about four or five to go and kind of threw it away tonight. I was happy with the riding in the main event.

Jett Lawrence (Team Honda HRC) – Second:
To be honest, I was calmer than last weekend, going into the East-West Showdown. I was just enjoying it, and that helped me have more fun with the track. In the main event I got out of the gate okay, but I was a bit off-balance. I lost all my traction there, but I was just happy to make it through the first turn. I liked battling with Austin [Forkner]; I think it helped me to not even worry about the championship, because I was more excited about the race. I tried some different lines, made some mistakes, but this track was so about being consistent. I’ve dreamed of this since I was a little kid. All the hard work that we and the team have put in, and all the hard times I’ve gone through – this one night makes all that disappear. I just have to say thanks to the team. I wouldn’t be here without my brother; I feel like he should have a number one plate too, because he’s a big part of this. This one is definitely a lot more than the outdoors [title]; I’ve had a lot of rough runs in supercross, so this is unreal.

Kyle Chisholm (Monster Energy Star Racing Yamaha) – Fifth:
It was a roller coaster of a day. I felt like I struggled to put everything together earlier in the day but overall felt good. We did our homework before the night show – watched the video and made sure the bike was where I wanted it. In the heat, it all came together – I got a good start and came away clean from the first turn pileup. I rode good laps, but of course, I couldn’t just come away from it completely clean. I made a dumb mistake and came up short in the rhythm section and went down pretty good, but I was able to get back up and come away with the win. In the main event, I got probably the best start ever and came up in the inside, but I just let off a little too soon, and I came out around fifth. A few guys got by me, and I passed a few guys, so I ended up staying right around where I started. I really wanted the podium tonight after getting that heat race win, but I’m still happy with the result. For me to come in and get a heat race win it’s awesome. I know it’s a bummer to have the team’s regular guys out, so I was really happy to be able to give the team a heat race win after all the hard work they’ve put in for me.

Derek Drake (BarX/ Chaparral Suzuki) – 12th:
Today was tough. I struggled with pace all day. I’m happy to come out healthy and ready for the next one in Salt Lake City.