Direct updates from round 15 of the season at Gillette Stadium.

Follow the 2022 Monster Energy Supercross Championship with direct updates from round 15 of the season at the Gillette Stadium through Racefeed. 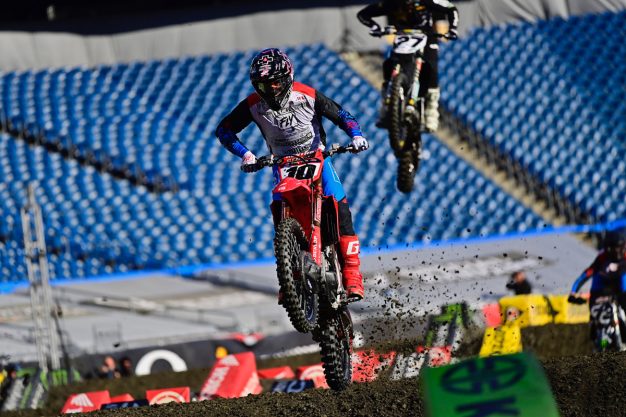 250SX East heat two:
A big pile-up in the first turn took down a number of the top riders, including Monster Energy Pro Circuit Kawasaki’s Austin Forkner and Rockstar Energy Husqvarna’s RJ Hampshire, while Kyle Chisholm (Monster Energy Star Yamaha Racing) grabbed the holeshot ahead of Huqvarna-mounted teenager Josh Varize. A Chisholm crash with a handful of laps remaining saw Varize inherit the lead, but on the final lap Chisholm surged past through the whoops to retake the lead and the victory. Forkner also tried to capitalise on Varize’s poor run through the whoops but the two collided and went down, allowing Jace Owen (Muc-Off FXR ClubMX Yamaha), Harvey Munoz (Kawasaki) and Mitchell Oldenburg (SmarTop Bullfrog Spas Motoconcepts Honda) past to qualify. Forkner and Varize remounted to finish fifth and sixth. Hunter Yoder (Honda), Lake Shaw (KTM) and Heath Osby (Yamaha) filled the remaining qualifying spots.

250SX East LCQ:
RJ Hampshire took the holeshot of the LCQ and avoided a big crash behind him that took down Ty Freehill (Honda) and tangled up at least half of the field. The Rockstar Husqvarna racer cruised to the victory ahead of Derek Drake (Bar X Suzuki), Jack Chambers (KTM) and Josh Cartwright (Kawasaki), who all qualified for the 250SX East main event.

450SX LCQ:
Husqvarna rider Scott Meshey scored the holeshot of the last race before the main events, but Alex Martin (Muc-Off FXR ClubMX Yamaha) took over the lead before the first lap was completed and stretched out a comfortable lead over Kevin Moranz (KTM). Martin would take a straight-forward win over Moranz, while Tristan Lane (KTM) found his way past Meshey late in the race to take third.

250SX East main event:
Honda privateer Cullin Park took the holeshot from Pierce Brown and Jordon Smith, with RJ Hampshire lurking in fourth. By the end of the opening lap, Lawrence was circulating in eighth after a subdued start off the gate. Up front, Smith crashed and dropped to the back of the pack, as Brown began to build a fairly handy lead. Lawrence calmly let the opportunities come to him, moving up to fifth behind Austin Forkner before half-race distance. The Australian bided his time, locked onto the rear wheel of the Kawasaki rider for several laps, before pushing Forkner off the track out of a turn. Lawrence let Forkner back past and they recommenced battle. Up front, Hampshire crashed while trying to pass Brown for the lead, but remounted in sixth. Forkner and Lawrence continued to click off the laps, catching and passing Brown on the second-to-last lap to then finish first and second, with Brown third. A fast-finishing Oldenburg finished fourth, with Chisholm fifth. Hampshire, Lopes, Varize, Park and Owen rounded out the top 10.

450SX main event:
Cooper Webb took the holeshot of the 420SX Main Event, with all of the main players, Tomac, Anderson and Sexton hot on his tail. As Tomac focused on making a pass on Webb in the opening laps, Anderson threw it up the inside of Yamaha rider in a turn, causing Tomac to stall his machine. The contact dropped Tomac to sixth, and from that point he settled into a safe rhythm, content to clinch the 450SX into his home town of Denver, CO next weekend. Up front, Anderson dispatched of Webb for the lead, with the KTM rider then steadily dropping positions through the pack to eventually finish sixth. Sexton kept Anderson in sight for half the race, before settling for second place, ahead of Musquin. Stewart and Barcia filled the remaining top five positions. Tomac would settle for seventh, ahead of the remaining top 10 racers, Friese, Martin and Brayton.