‘I haven’t really gone that speed since last year’ – Webb 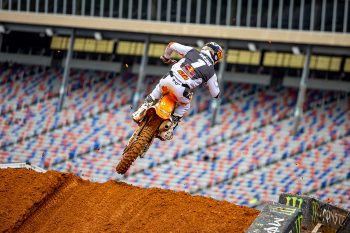 Webb was sidelined from round 13 in St. Louis due to a practice crash, making his comeback at Atlanta, where he demonstrated pace to challenge at the front for the majority of the race.

“It was a crazy race – a good battle for the lead and we were all going for it,” Webb reflected. “I had a couple crashes but it felt really good to be back in the mix. I missed last week and just been struggling all season but man it felt great to just get back in it.

“I haven’t really gone that speed since probably last year, so I’m pretty happy. I have to give it up to the team, I had a big crash last week and they came down to Florida and we figured some stuff out. We’ll just keep going for podiums and hopefully get the first win of the season – there are three races left and we’ll see what happens.”

The defending 450SX champion sits seventh in the Monster Energy Supercross point-standings, evidently lacking the ingredients to challenge for race victories for the majority of this season despite scoring four podium finishes. He returned to the Baker’s Factory in the back-half of the series.