Smartop Bullfrog Spas MCR Honda rider Mitchell Oldenburg landed a breakthrough third position in 250SX East at St. Louis, but the road to ending a three-year podium drought in 250SX was not all smooth-sailing, as we learn in this latest Profiled piece.

Rewind to the end of last season, now 27, Oldenburg was left in search of a professional seat after finishing ninth in the eastern region during the Monster Energy Supercross series with Muc-Off Honda Racing.

With a newborn on the way and a family to feed, Oldenburg was no longer interested in racing ‘for free’ and started a fencing company in Texas, which he used to provide a source of income last summer. An opportunity to make a proper living from racing motorcycles then surfaced when he received a text from MotoConcepts team manager Tony Alessi. 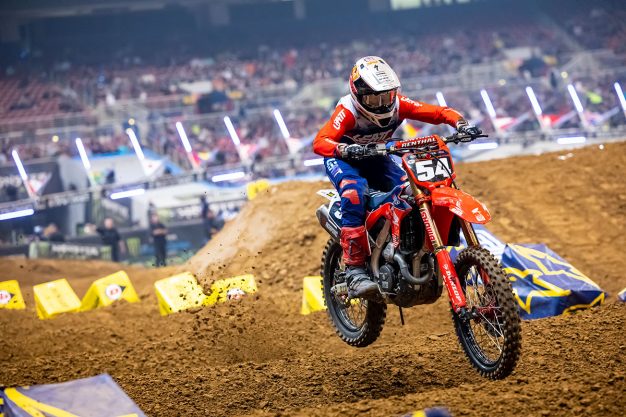 “Tony Alessi had kind of texted me out of nowhere – end of July, early August – and said ‘hey, are you available for a phone call?’,” Oldenburg explained. “My whole impression of it was that it was going to be 450 and we were just going to go race.

“I don’t think it was until the third or fourth phone call that they were like, ‘we want you to do 250 one coast and then 450 the other’ and I was all about it, because I feel like I have some unfinished business in the 250 class still. I just think there’s still stuff that I want to accomplish.”

The number 54 admittedly was doubting himself as he entered the 2022 season, with his last podium coming at East Rutherford in 2019 while then part of Monster Energy Star Racing Yamaha. Notably, he also finished third in 2019 Australian SX2 Championship that same year after transferring to Honda.

“It’s been a long time, a stressful couple of years, just not knowing if this was what was meant for me in life,” Oldenburg added. “It’s kind of unique, our sport is unique in that way that we all take different paths and different journeys to get to where we are in our careers. 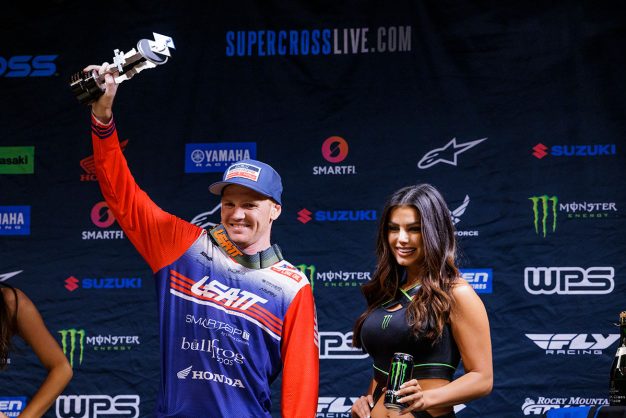 “The last couple of years, I didn’t know if this is what I was supposed to do in life, I’m just super-thankful for [Mike] Genova and Tony Alessi, the MotoConcepts team for giving me this opportunity, and just believing that I can do it, because you definitely start to question and doubt yourself when it doesn’t happen.”

The podium in Arlington’s Triple Crown on the weekend marked Oldenburg’s fourth in the 250SX category and one that was earned through a consistent night of racing where he scored 3-3-4 results.

“Crazy night for me, honestly this one probably felt the best,” he reflected. “I felt like my other podiums I was expected to do it and this one really tops them for sure.”

Oldenburg currently sits seventh in the 250SX East as the season moves to Atlanta this Saturday for the 250SX East/West Showdown, which marks round seven of nine in the eastern region’s schedule.