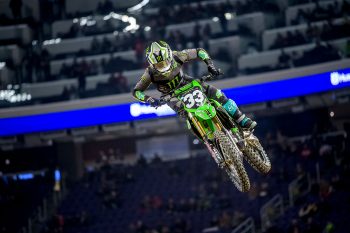 Monster Energy Pro Circuit Kawasaki has confirmed the return of Austin Forkner at this Saturday’s 250SX East/West Showdown in Atlanta.

Forkner, 23, broke his collarbone following the contact and crash with Jett Lawrence in Arlington’s Triple Crown, close to seven weeks ago.

The incident was a crushing blow to the number 33’s title aspirations, however after showing strong form in the opening rounds of the season the remaining three rounds of 2022 250SX East offer a chance at redemption.

The KX250 rider started his 2022 indoors campaign with a second-place in Minneapolis, and won the opening main event at Arlington before the injury occurred in the third race. Forkner missed four rounds of the series in his absence, now looking ahead to Altlanta Motor Speedway.

“Both guys have done some MX riding recently to prep for the faster style track at Atlanta. They fly out for Atlanta’s press day on Thursday and are looking forward to racing.”