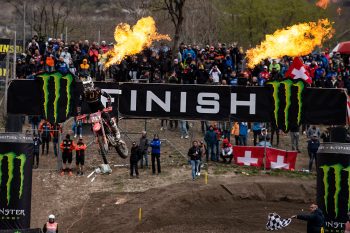 It was a perfect 1-1 scorecard for Team HRC’s Tim Gajser in Trentino, allowing him to extend his MXGP red plate advantage as a clean sweep from Tom Vialle in MX2 elevates him to the points lead.

Gajser won both races with a comfortable margin, as Maxime Renaux (Monster Energy Yamaha MXGP) recovered from a difficult round in Portugal to land second overall at Pietramurata, courtesy of 4-2 results.

Round four winner Jorge Prado (Red Bull GasGas Factory Racing) was P3 thanks to 3-4 finishes -stalling on the first lap on moto two. The Spaniard finished ahead of Monster Energy Yamaha MXGP duo Jeremy Seewer (5-3) and Glenn Coldenhoff (2-11), who completed the top five.

Looking at the championship standings, Gajser leads by 33 points from Prado, with Renaux a further 19 back in third. 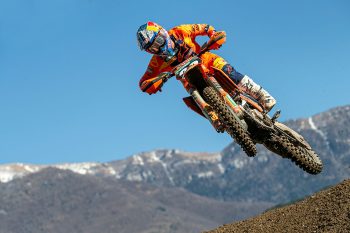 Vialle (Red Bull KTM Factory Racing) took control of the MX2 championship in Trentino, thanks to 1-1 results as Jago Geerts (Monster Energy Yamaha MX2) fell in the second race and did not score any points from that outing. Notably, he was able to pick himself up and ride back to the pits.

Kay de Wolf (Nestaan Husqvarna Factory Racing) recovered from a challenging opening race in sixth to finish second overall in the second race, landing him P2 for the round, ahead of Mikkel Haarup (Big Van World MTX Kawasaki) who continued his impressive run of form to complete the overall podium, finishing 6-2.

Points wise, Vialle leads Geerts by 14 – the number 93 able to land third in the first race before his misfortune in the second outing – as Haarup is third, 39 points from the red plate. 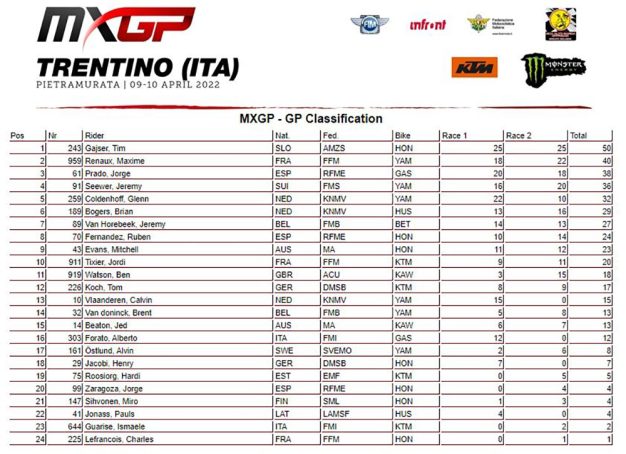