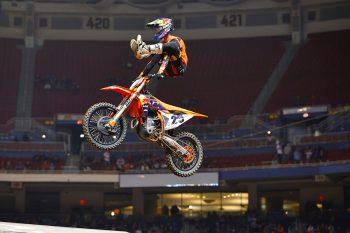 Red Bull KTM’s Marvin Musquin made it count at the final Monster Energy Supercross Triple Crown of the 2022 season in St. Louis, splitting wins with Chase Sexton and Eli Tomac for the overall.

The first 450SX race of the night saw Sexton recover from a quiet effort in qualifying to get out front from the outset and stay there.

That left Justin Barcia (TLD Red Bull GasGas) by himself in fifth, as Jason Anderson (Monster Energy Kawasaki) was sixth despite falling mid-race and not losing any positions. MotoConcepts duo Brayton and Vince Friese were next in line, with Brandon Hartranft (Twisted Tea Suzuki) and Ryan Breece (Yamaha) ninth and 10th.

A win from Musquin in the second race put him in prime position for the overall tonight, but it was third from Sexton that will keep both in close proximity going into the final outing.

In between them, Anderson was solid for second, which also increases his hopes for at least a podium on the night. Fourth and fifth was once again Tomac, followed by Barcia, with places six through 10 including Friese, Brayton, Hartranft, Bogle and Fredrik Noren (KTM).

A high-profile non-finisher was Stewart, but he’s intending on returning for the final race after walking off any leg pain he was displaying, while Wilson didn’t return, nor did Martin – night over for both.

The final gate-drop of the round in 450SX saw Tomac power away at the front to a 6.845s win and to become the third different rider to do so tonight, however, it was Musquin who held strong for the overall in his and Red Bull KTM’s first of the year.

Finishing P2 in the final moto ahead of opening race winner Sexton was enough to seal the deal, while fourth was Barcia ahead of Anderson. Stewart managed to return for race three and rode to sixth place, beating Brayton, Bogle, Hartranft and Friese the top 10.

Overall, Musquin made it count on top of the podium ahead of Sexton and Tomac, who also wrapped up the Triple Crown for the season on 73 points. The championship tally leading into Atlanta has Tomac 56 points ahead of Anderson, with Barcia another six behind in third position. 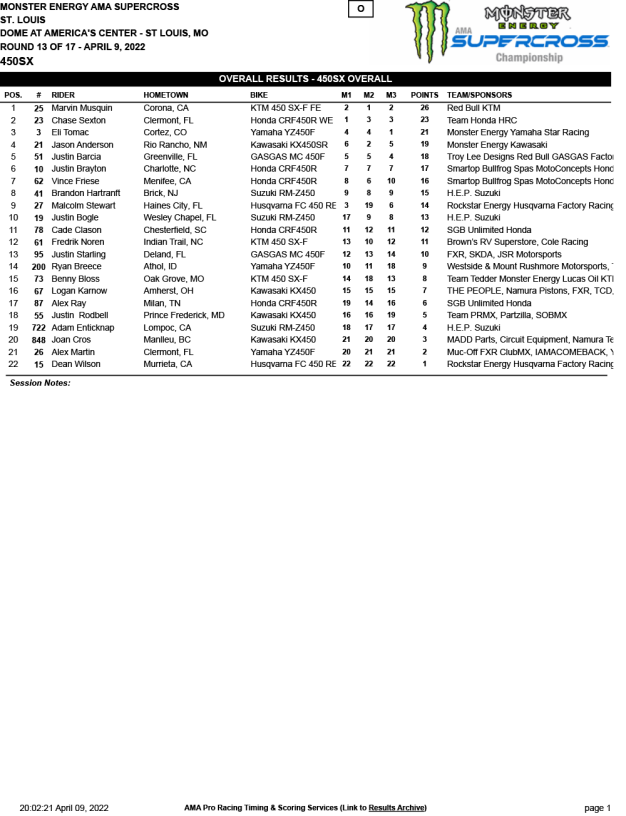