A career-first 250SX victory belonged to Rockstar Energy Husqvarna’s RJ Hampshire on an unpredictable night in St. Louis, edging races one and two winner Jett Lawrence for the overall.

While the field has thinned out coming into this weekend, the opening race of the night produced action aplenty. It was Hampshire who led early from Mitchell Oldenburg (Smartop Bullfrog Spas MCR Honda) and Jordon Smith (Fire Power Honda Racing).

The attention quickly turned to Josh Varize (Husqvarna) and Pierce Brown (TLD Red Bull GasGas) crashing, which forced the latter out with a technical issue. Fastest from this afternoon, Hampshire then went down while still leading at halfway and by that time, Team Honda HRC’s Lawrence had recovered from a slow start to take over at the front soon afterwards.

In race two, the initial start was red-flagged while Lawrence was leading at halfway after Peters went down, requiring immediate medical attention. In that portion, Brown again experienced bike troubles that ruled him out and he wasn’t permitted to line-up for the restart.

Once they did get going again, Hampshire led the opening five laps and put up a fight, but Lawrence was too strong, making his way by and going to win again with over six seconds up his sleeve.

It was a repeat of the race one podium as Lawrence led Hampshire and Oldenburg, with Chisholm and Smith the top five. The top 10 were Enzo Lopes (Muc-Off FXR ClubMX Yamaha), Varize, Owen, Derek Drake (BarX Suzuki) and Nicoletti.

In what looked to be a perfect night for Lawrence, an error in the final race allowed Hampshire to steal his thunder as he went on to win the final main event and overall.

It was Brown who led in the early stages before Hampshire took control – the former falling around that same point – and behind him came Nicoletti, who in turn was ahead of Chisholm. Fourth was another convincing ride from Oldenburg, while Lawrence charged from the back of the pack to P5, leading Brown, Drake, Varize, Owen and John Short (Honda).

Overall, however, it was Hampshire who brought home his first-career 250SX victory, joined on the podium by Lawrence and Oldenburg. The standings are still led by Lawrence, 34 points clear of Cameron McAdoo (Monster Energy Pro Circuit Kawasaki) despite him being injured yesterday, with Hampshire a further seven markers back in third.

Next up will be the 250SX Showdown at the Atlanta Motor Speedway, round 14 of the 2022 Monster Energy Supercross season on Saturday, 16 April. 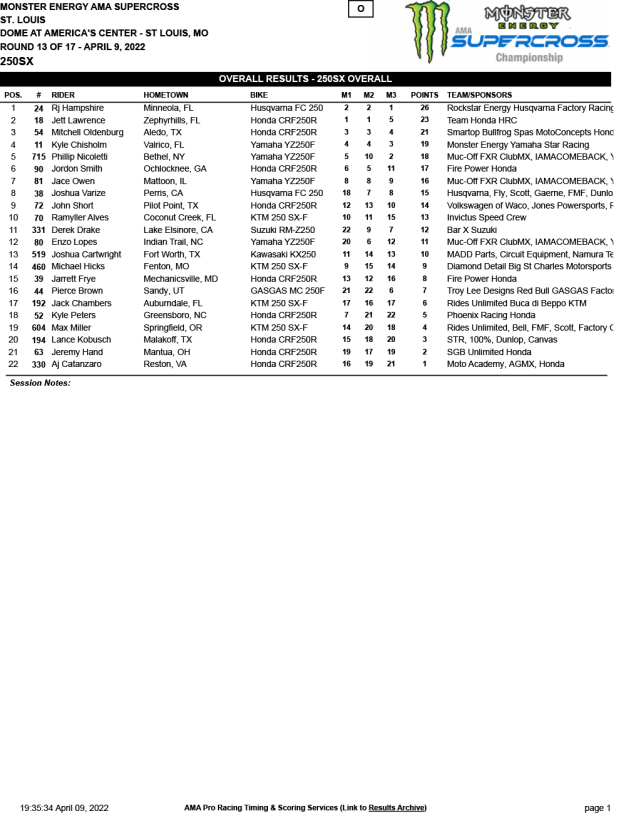