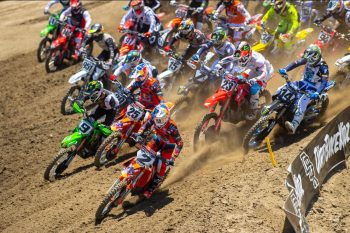 MX Sports Pro Racing has announced that the seven competing manufacturers in American motocross – GASGAS, Honda, Husqvarna, Kawasaki, KTM, Suzuki, and Yamaha – have combined to provide a record level of contingency for the 50th Anniversary of the Lucas Oil Pro Motocross Championship, sanctioned by AMA Pro Racing. For the first time, the millions of dollars made available through contingency has reached double digits, as more than $13 million in funds will be available to competitors this summer when the 12-round season commences on Saturday, May 28, from Southern California’s Fox Raceway.

“The continued investment from the sport’s competing manufacturers to provide benefits for those who compete on their behalf is invaluable to the overall success of the Lucas Oil Pro Motocross Championship,” said Roy Janson, Managing Director, MX Sports Pro Racing. “Even in the face of uncertainty over the past two seasons, our manufacturers never wavered in their commitment to the sport. The unprecedented level of support from our OEM’s this season is a testament to their ongoing dedication to not only be competitors in the championship, but also partners in the longevity of the world’s most prestigious off-road motorcycle racing series, which will reach the half-century mark this summer for a landmark season what will further deepen the incredible legacy of American motocross.”

The seven manufacturers set to line up on the gate for the 2022 season present an impressive global footprint, with roots that stem from four countries – Austria, Japan, Spain, and Sweden. Combined with the widespread reach of an international field of competitors that represents upwards of 20 different countries, the Lucas Oil Pro Motocross Championship is one of the most globally diverse motorsports series in the world, headlined by reigning 450 Class Champion Dylan Ferrandis, from France, and defending 250 Class Champion Jett Lawrence, from Australia.

The 50th Anniversary of the Lucas Oil Pro Motocross Championship will be bookended by the holiday weekends that serve as the proverbial starting point and finishing point of the summer, with the season-opening round over Memorial Day Weekend on May 28 and the season finale over Labor Day Weekend on September 3. The 12-round season will visit 10 different states, visiting iconic venues with decades of history like the Hangtown Classic (June 4), High Point Raceway (June 18), RedBud MX (July 2), The Wick 338 (July 9), Spring Creek MX Park (July 16), Washougal MX Park (July 23), Unadilla MX (August 13), and Budds Creek Motocross Park (August 20), as well as additional world-class venues in Fox Raceway (May 28 & September 3), Thunder Valley Motocross Park (June 11), and Ironman Raceway (August 27).