Those who have managed to finish every main event of 2022 so far.

The 2022 Monster Energy Supercross Championship has seen its fair share of attrition in 450SX, with a number of top riders out altogether and others forced to miss races or DNF due to injury. Amidst the drama, MotoOnline takes a look at the leading riders who have gone the distance and evaluates their season so far. 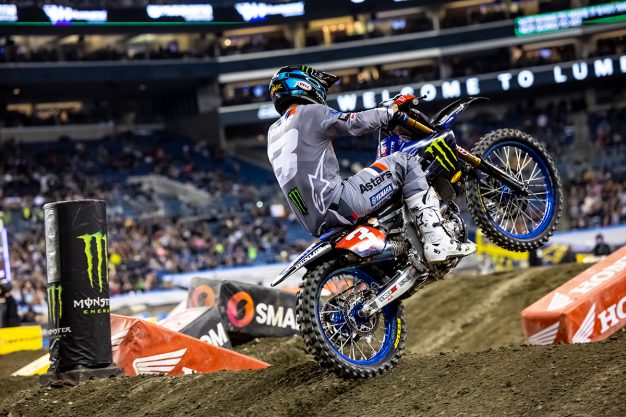 Rider: Eli Tomac
Rating: A+
Rundown: After finishing a relatively quiet sixth at Anaheim’s season-opener, it was difficult to imagine that Monster Energy Star Racing Yamaha recruit Eli Tomac would go on to win seven of the next 11 races. Tomac has shown speed, class and composure this season, methodically adapting to the YZ450F during the first three races before scoring his first victory of the year at A2. From there, the red plate-holder has been almost unstoppable, using sheer pace while keeping his nose clean to stretch out a 54-point advantage with five rounds remaining. The only real blemish on Tomac’s 2022 season was the first lap incident in Minneapolis with teammate Dylan Ferrandis, however, delivering a champion’s performance, the number three was able to recover and finish sixth. Currently on a five-win streak, Tomac has one hand on this year’s 450SX crown.

Rider: Justin Barcia
Rating: B+
Rundown: In typical Justin Barcia fashion, the TLD Red Bull GasGas rider came out swinging at round one, notching a solid third at Anaheim 1. Barcia backed that performance up with another P3 a week later at Oakland to take over of the red plate early. A tough night in San Diego saw him relinquish the championship lead and he wasn’t able to stand on the podium again until A3. For the most part Barcia has been consistently in the top five this season, landing five podium finishes, despite being docked three points from his P2 at Indy following an incident with Jason Anderson. However, he has lacked the outright pace and consistency of Tomac to be able to capture a victory and remain within striking distance of the red plate. Nonetheless, it has been a credible season from ‘BamBam’, who has recently pushed through a cut to his middle finger – requiring stitches – to ensure he continued to rack up the points. He currently sits third in the 450SX standings, just five points back from Jason Anderson (Monster Energy Kawasaki).

Rider: Malcolm Stewart
Rating: B+
Rundown: In his first season with the Rockstar Energy Husqvarna Factory Racing team, Malcolm Stewart has shown incredible speed at times, which scoring only two podium finishes this year doesn’t reflect. Qualifying fastest and winning a heat race on occasion this year, ‘Mookie’ has finished inside the top five in all but three 450SX main events in 2022 – a consistency that sees him P4 following Seattle, just six points adrift from Anderson in second. Unfortunately for Stewart, collisions with Anderson at both Arlington and Daytona cost him valuable points, such that could prove costly at the end of the season considering how tight the battle for the runner-up position is. If the number 27 can translate his recent form into the main event, then he could perhaps be a dark-horse to end Tomac’s winning streak. Rider: Marvin Musquin
Rating: B
Rundown: The Red Bull KTM Factory Racing mainstay has experienced another up and down season in 2022, coming into form lately to score 4-3-3 results in the most recent three rounds. Inconsistencies throughout the year – finishing outside the top five on six occasions – mean Musquin currently sits sixth in 450SX after 12 rounds, behind the likes of Anderson and teammate Cooper Webb even if both did exit Detroit. The Frenchman’s recent uplift of form has allowed him to remain within striking distance of a top-three championship position and will be one to watch in the remaining five rounds as he attempts to edge his way forwards. Plus, remember, he’s on a Supercross-only contract, so is coming toward the end of his schedule.

Rider: Dean Wilson
Rating: C+
Rundown: Many who follow Dean Wilson and sport closely will understand that the likeable number 15’s potential outweighs his results this season. Finishing outside the top 10 on four occasions and not landing a single top-five finish has been underwhelming by Wilson’s own account, even if it is hard to rank him in the Cs. To his credit, Wilson has soldiered on and scored a season-best seventh in the previous two outings at Indy and Seattle. Currently eighth in the standings, the Rockstar Energy Husqvarna rider is working his way closer to a top-five result and will be hoping to take that next step when the series resumes at St. Louis. Who knows, we could even see a podium before the year’s out at this rate.