Another dominant performance at Seattle saw Monster Energy Star Racing Yamaha’s Eli Tomac claim his seventh victory of the season, as Hunter Lawrence delivered to stand on the top step of 250SX West. Both riders were available to the media following the race for this Debrief feature. 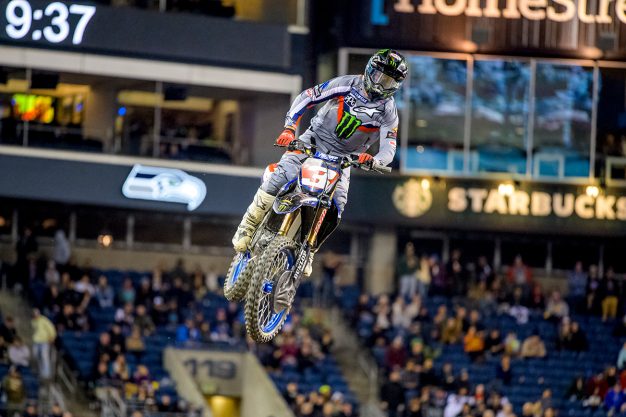 Each week there are these milestones, these records that you’re having to hear about. Daytona was obviously the big one. It seems like every week with tying Chad’s [Reed] record, tying your own record or passing Dungey in the all-time points list. Does that stuff get to you at all? I mean we have to talk about it and obviously, it’s our focus as you move along. Does that stuff get to you at all, in a positive, in a negative, do you think about it outside of just our questioning?

No, not the single race stuff. Not like the Daytona or the all-time list. My main focus is always championship. That’s all it’s been this year. Like I said, that’s been it.

You’ve got a big lead in the championship, so there’s a lot of talk about management and how you approach it. It doesn’t seem like you are buying into that at all, is that true? Is it individual nights still looking for win?

Still looking wins. Before tonight, there was six left, or whatever we are at – six or seven. So there’s just too many to pump the brakes at. A lot of times when you do that, other things happen and you get out of rhythm. So, just trying to keep what we’ve got going on going on.

This is how you would like to do it right, get the start, get out front and put together a perfect race like that. Are these wins, they are obviously rare, they don’t happen that way very much, are these wins extra special though?

Yeah, it was off to an awesome start. These shelves off the starts are a little bit funky. The last time we had them, I was actually terrible with it, and this time I was really good with it, going off the shelf there and we would click into third gear. So, got the holeshot and putting the big sprint on early. The track was really nice early on, and then of course it turned into a beast, and that was it. There was like two different tracks tonight, I thought, between the first half and the last half.

Everybody you speak to is like ‘if Eli races again next year, if he decides to come back’. You’re one year with Star Racing, one year option. Let’s say you went three more, you’re one behind Ricky [Carmichael] and three behind James [Stewart]. How much does that play into your decision to come back for another year, or does it even?

No, it doesn’t. It will be whether or not I still want to keep doing it. I’ve told myself, as long as I enjoy it and I have the chance at winning, I’ll keep going. So, like I said, that’s all I tell myself – that’s not going to matter if I’m one away from RC or ‘x’ amount from James.

Is there any kind of timeline on that decision?

[Laughs] I have no idea right now. It will just come later on, and I don’t know when that is.

This is your fifth win in a row, and basically one of the best sequences of races in your supercross career to this point. I wanted to ask you though, thinking back to 2017 when you were on a tear that year, seemingly winning races at will. Where would you rate your comfort level on the bike now, thinking back to where you were back then?

When you can string them together like this, I would say it’s a similar feeling. Things just go your way, and everything feels right, I feel good on the bike and the motorcycle and that’s just the way it has been. Been able to execute good starts and get to the front of the pack that way. When you can do that in a row, it’s a good feeling.

We’ve been on east coast time for the last three races and now we’re on the west. Does that feel different to you guys? Just that kind of a quick change where we’re going and starting main events three hours different than what we’re used to over the last few weeks? Is there any kind of feeling that you guys have throughout the day that feels different, energy-wise, awareness-wise?

We travel so much, your body has no idea what’s going on. Then race day, you’re just amped and ready to go.

Yeah, I was trying to do as much as I could. There was times where I missed it though, and that was the benefit to having a gap. I was able to just kind of bail to a double-double line or the on-off. I did the quad a handful of times the last half. I was more thankful to have that gap for the whoops. The whoops were gnarly. I was getting them good in the first half again, and then second half they were just the normal, cupped-out, crazy whoops. That line was cool. We haven’t had a big line out of a turn like that in a while.

Twelve weeks you guys have been on this thing. Obviously, the work won’t stop, but will you have a chance next weekend to do anything on the personal side, take a breather, or do you work straight through the weekend?

A weekend off is nice at this point. Travel just is what it is. I’m not doing anything special. Maybe not travelling. 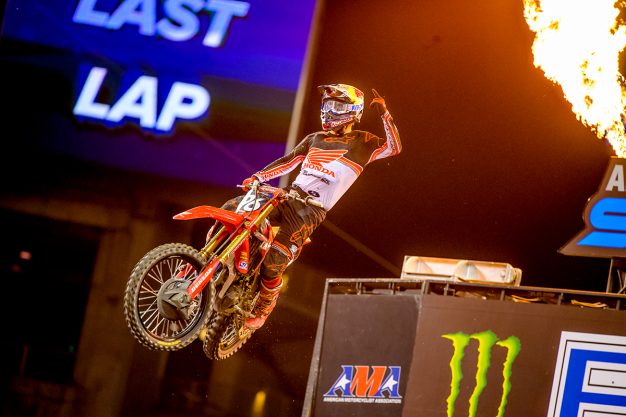 Yeah, I had two weeks off just to let the body heal and stuff, I was a bit banged up. Kept pretty busy, it was good. We just kept working on a few things we felt needed to be better. It was cool to put them into action tonight.

Can you elaborate on those things? Is it bike stuff, physical stuff?

Just bits and pieces. Little technique things, little stuff like that. Weaknesses, obviously whoops, and just a few other things. We did work on the bike, so I feel like we just got a few percent better all around.

You started the west coast kind of unexpectedly. Was that a chance to get into the motorcycle a little bit more and just find some things without that pressure of the season?

Yes and no. It was good because we had Jett racing, obviously. So, we found some stuff, like a few engine things. I over-jumped everything on press day by like five or ten meters because it was way faster than my practice bike. So that was good. Just learning a few things from what they found with Jett.

We were grafting all day, to be honest with you. Every session we were chasing the track, chasing the bike, we were making changes every session. It was kind of like a little nervous in-between. Not nervous, but you’re kind of making a decision not knowing what it’s going to do, so it’s a little nervous not knowing the outcome. So, we had to have a lot of faith in the team and we all worked really well and felt really good for the night show.

Did you see him use that right side of the whoops at all? Did you know that was his faster line where he was making up all that time on you?

No. I knew my line maybe wasn’t the best, but I knew how it would react to my bike, and I was just trying to… it may not have been the fastest, but I was thinking, if I can just be the most consistent line, that would be my line through there.

Obviously you’re older and you’ve got more experience, but in what ways are you different or better now than when you were winning MX2 races?

I mean it’s obviously a whole different ball game over here and stuff. My experience in supercross isn’t crazy, I’ve only done 17 main events. So, I’m still just learning. Honestly, I’m just trying to better myself every race night, learn. It’s honestly just trying to build and be better every time I’m at the race and during the week to become a better rider in the future. That’s what the end goal is. It’s not to be in 250. This is not focusing on everything to be a 250 guy. Everything is into the future, into the future. That’s just what we’re trying to do, just be better every time we step on the track and on the motorcycle.

What do you do during the break before Atlanta? Do you do some outdoor testing?

You try to throw some outdoor days in there, and then obviously Atlanta is coming up. You definitely do a little bit more outdoors, but it’s not like sweep supercross underneath the carpet.