The field is set for the 12th round of the Supercross season. 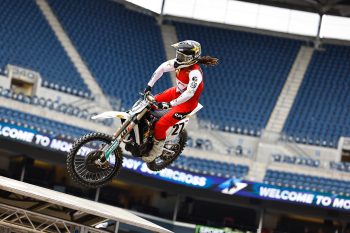 The Monster Energy Supercross series returned to the west coast with Malcolm Stewart and Michael Mosiman topping the qualifying time sheets in Seattle.

Weather is always a factor when the series returns to the west coast for it’s annual stop in Seattle, but mother nature remained calm for the qualifying sessions, giving riders a solid track to sort the order for tonights race.

The final round of 450 qualifying saw multiple riders hit the ground in dramatic fashion, with Malcolm Stewart(Rockstar Energy Husqvarna) eventually finding himself at the top of the leader board when the checkered flag came out.

Stewart has been solid this season, attributing hard work with trainer Aldon Baker as a large part of that success. The Rockstar Energy Husqvarna rider was the only rider to notch a lap in the 47s range, with a 47.915 setting the bar.

Second place went to Marvin Musquin, who looks to continue momentum from a podium finish at last weekend’s race in Indianapolis, while points leader Eli Tomac took the final spot in the top three.

Musquin and Tomac were separated by just 0.002s, and put themselves over a half second ahead of fourth place finisher Justin Barcia(TLD Red Bull GasGas). Barcia enters the weekend tied for second place on the back of a podium last weekend.

Chase Sexton was one of the aforementioned riders that hit the ground hard in the final qualifying session, with the Team Honda HRC rider missing a shift in a rhythm section resulting in a violent crash that saw him go over the bars. He eventually remounted and finished the session in fifth place.

First rider in the 49s range was Jason Anderson aboard his Monster Energy Kawasaki in sixth with a 49.031s lap. Anderson is tied for second in the championship, sitting 51 points adrift of the leader.

Ninth went to Justin Starling(GasGas) who impressed with a 49.848s lap to top reigning champion Cooper Webb in 10th. Webb crashed hard in the early stages of the final session, but went on to finish and looks to be fine for the night program. In the 250SX West division’s return to action, it was a hot lap by Michael Mosiman that topped the timesheets. The TLD Red Bull GasGas rider put down a 47.815s lap to set the bar.

Mosiman was followed by red plate holder Christian Craig(Monster Energy Star Racing Yamaha) who was visibly frustrated to be second place at the end of the session.

Garett Marchbanks rounded out the top three on his Muc-Off FXR ClubMX Yamaha as he looks to find himself on the podium in tonight’s race. Team Honda HRC rider Hunter Lawrence was fourth just 0.003s back from Marchbanks.

Vince Friese(SmarTop Bullfrog Spas Motoconcepts Honda) crossed the line seventh fastest, while Derek Kelley(KTM) put in a solid run to land inside the top 10 ahead of the two factor supported machines of Jo Shimoda(Monster Energy Pro Circuit Kawasaki) and Jalek Swoll(Rockstar Energy Husqvarna) as the final riders in the top 10. 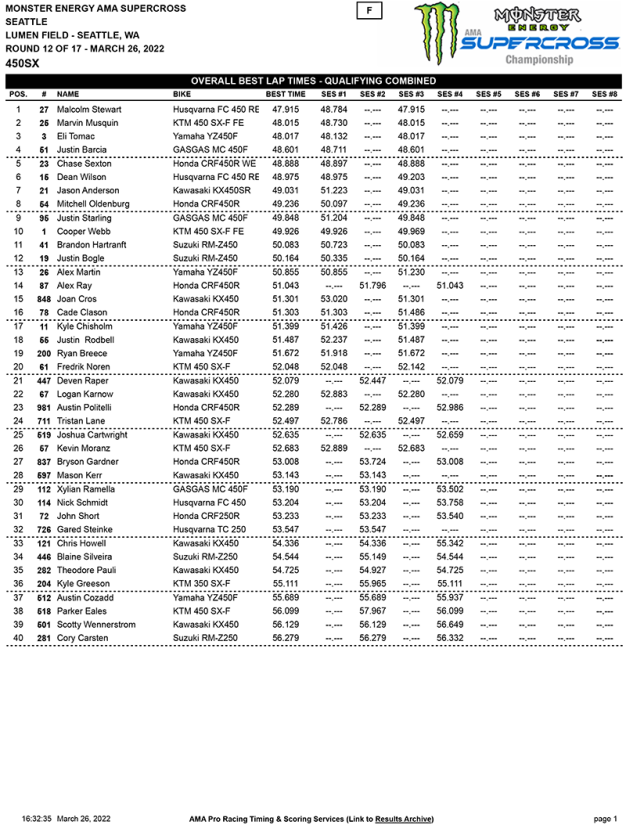 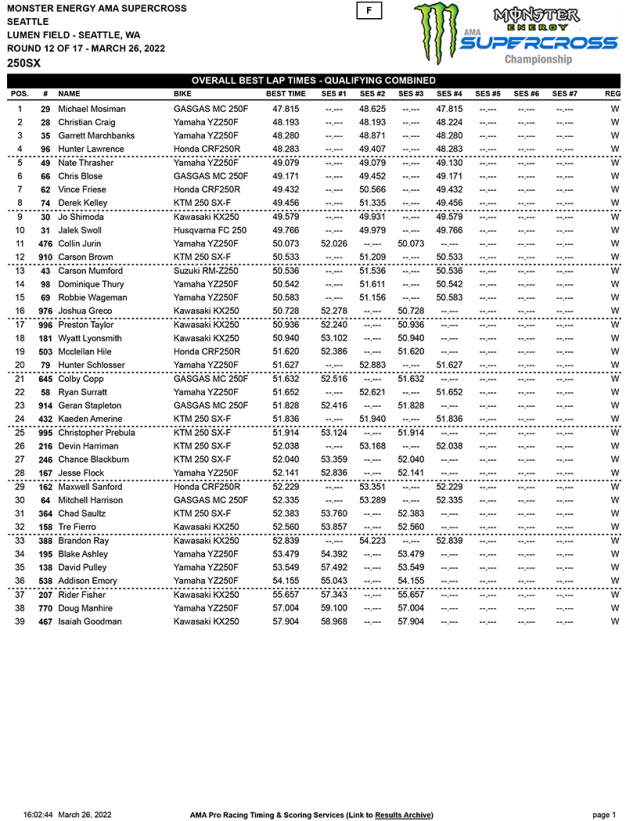