Direct updates from round 12 of the season at Lumen Field.

Follow the 2022 Monster Energy Supercross Championship with direct updates from round 12 of the season at Lumen Field in Seattle through Racefeed. 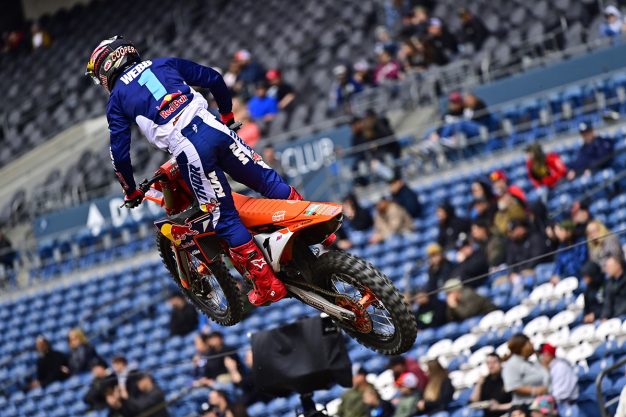 250SX West heat 1:
The first holeshot of the night went to Dominique Thury(Muc-Off FXR ClubMX Yamaha), with Swoll, Lawrence, Blose and Craig in tow. Lawrence made his way to the front but was unable to pass Thury for the lead. Lawrence then had a big moment, that dropped him and Swoll outside of the top three. Craig made shortwork of the lead duo to work his way to the front, as Blose followed closely behind. Lawrence recovered to pass Thury and set out after the leaders. On the third lap, Lawrence worked his way into second, with Craig nearly three-seconds ahead at the front. While Lawrence was able to run the pace of Craig, he was never able to make up any ground, allowing Craig to win the heat with Lawrence and Blose taking the top two spots. Carson Brown(KTM) was fourth, with Thury fifth. Swoll took sixth, with Kelley, Ryan Surratt(Yamaha) and Kaeden Amerine(KTM) taking the final transfer spots.

250SX West heat 2:
Heat two was Thrasher taking the jump but Friese and Carson Mumford(BarX Chaparral Suzuki) got by quickly, with Marchbanks making his way to second in the first half lap. Marchbanks made a mistake dropping him to sixth, leaving Friese with a cushion over Thrasher, Mumford, Shimoda and Mosiman in the top five. The battle for third was intense in the opening laps, with Mumford holding off Shimoda and Mosiman while they diced it up in the four spot. Shimoda made his way through on Mumford, with Marchbanks getting around Mosiman and Mumford shortly after. Mosiman put a solid blockpass on Marchbanks to regain fourth, but at the front this one was all Friese. Thrasher made a charge as the duo went through lapped traffic, but was unable to made a pass in the final lap, leaving Friese for his first career heat win. Third went to Shimoda, with Mosiman, Marchbanks, Mumford, Robbie Wageman(Yamaha), Geran Stapleton(GasGas) and Mcclellan Hile(Honda) rounding out the final transfer spots.

450SX heat 1:
Barcia grabbed the holeshot with Musquin, Fredrik Noren(KTM), Bogle and Tristian lane in the Oldenburg in the top five. Musquin challenged Barcia on lap one, but Barcia kept composure and maintained the lead. Webb who was mired deep outside of the top 10 off the start, but worked his way to seventh by the end of lap three. Barcia managed the middle part of the race well, stretching out to a four second lead by the final lap, eventually taking the win. Musquin was second with Bogle, Oldenburg, and Wilson rounding out the top five. Sixth was Webb with Alex Ray(Honda) seventh and Noren just behind in eighth. The final transfer spot saw major drama on the final lap with Kevin Moranz(KTM) taking both himself and Cade Clason(Honda) out in an attempted pass, Clason remounted quickly and maintained the final transfer spot.

450SX heat 2:
Tomac got the jump but Anderson took the holeshot, with Stewart quickly jumping his way past and taking the lead early on. As the dust settled it was Stewart, Anderson, Tomac, Kyle Chisholm(Yamaha) and Starling in the top five. Stewart jumped out to a three second lead by the halfway point, while Anderson maintained distance over Tomac in second. Anderson and Tomac charged with three laps to go, catching up to Stewart and setting up a battle for the win in the closing laps. Stewart missed a rhythm shortly after, allowing Anderson to go up the inside and make the move for the lead, with Tomac doing the same two turns later. Tomac charged, but was unable to make any moves, giving Anderson the heat win. Tomac was second, with Stewart, Chisholm, and Starling taking the top five spots. Sixth was Brandon Hartranft(Twisted Tea HEP Suzuki) followed by Ryan Breece(Yamaha), Austin Politelli(Honda) and Joan Cros(Kawasaki) in the final transfer spots.

250SX West LCQ:
Wyatt Lyonsmith grabbed the holeshot, with Tre Fierro(Kawasaki), Joshua Greco(Kawasaki), Jesse Flock(Yamaha), Devin Harriman(KTM) taking the top five spots in the opening half lap. Greco quickly worked his way into second, as Copp came through and grabbed the final transfer spot on lap one, but Flock made his way back into fourth. Mitchell Harrison(GasGas) then made his way into the top four on lap four, as the battle at the front heated up between Lyonsmith and Fierro. Lyonsmith went on to win, with Fierro, Flock and Harrison taking the final transfer spots.

450SX LCQ:
Moranz grabbed the holeshot with Justin Rodbell(Kawasaki), Lane, Theodore Pauli(Kawasaki) taking the transfer spots out of turn one. Pauli and Rodbell dropped back giving John Short(Honda) and Bryson Gardner(Honda) the transfer spots. Alex Martin(Muc-Off FXR ClubMX Yamaha) made his way into fourth on lap three, with Pauli just behind. Martin with through on Lane with two to go, the duo over 13 seconds ahead of the fifth place rider, looking safely into the main event. Moranz had a massive mistake on the final lap, nearly crashing and dropping to the fourth. That left Short to take the win, with Martin, Lane and Moranz taking the final transfer spots.

250SX West main event:
The holeshot went to Craig with Mosiman, Shimoda, Lyonsmith and Blose in the top five. Lawrence quickly made his way into fourth, as Craig and Mosiman began to break away early. Mosiman began to pressure Craig on the second lap, as Lawrence worked his way around Shimoda for third, just four seconds back from the duo. Mosiman didn’t wait long to pull the trigger, going for the block pass and putting Craig to the ground, dropping him to sixth place. Lawrence pushed the issue, catching Mosiman and making a move with nine minutes to go in the race. All the while, Craig put his head down and charged for the front, finding himself just three seconds back at the halfway point. Craig passed Mosiman with ease in the following lap, leaving him to fall into the clutches of Thrasher who was charging forward in fourth. With two minutes to go, Thrasher hit the ground hard not once but twice, giving Mosiman some breathing room in third. On the final lap, Craig closed the gap to Lawrence, but it was not enough, with Lawrence holding on to grab the win. Craig took second, with Mosiman third, Shimoda trying a last corner pass for the position eventually finding himself off track, however managing to finish fourth. Fifth was Friese, with Marchbanks, Blose, Swoll, Wageman and Kelley taking the final spots in the top 10.

450SX main event:
Tomac took the holeshot with Barcia, Musquin, Anderson, and Chisholm in the top five. Wilson worked his way into fifth early, as Tomac charged to a lead quickly out front. The lead duo broke away, with Barcia keeping pace about a second back from Tomac at the front, while Anderson settled into a lonely third with 15 minutes to go. Deeper in the pack, Webb worked his way into seventh after another tough start, with Wilson and Stewart just ahead of him as he chased a top five spot. At the halfway point, Barcia made a massive mistake, hitting the ground and dropping to fifth place, leaving Tomac, Anderson and Musquin in the top three, with Stewart closing for the final podium position. Tomac stretched out a 14 second gap over the field as the wound down, while Webb continued his charge, closing in on Barcia for fifth place. Tomac held on to take his fifth straight win, with Anderson second and Musquin third. Fourth was Stewart followed by Barcia, Webb, Wilson, Bogle, Oldenburg and Hartranft in the top 10.