Craig and Mosiman clash in 250SX West return to action. 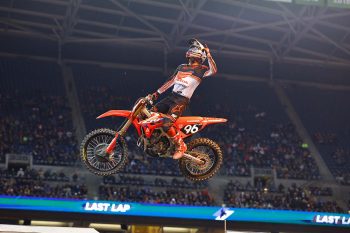 An exciting return to action for the 250SX West championship saw Hunter Lawrence take his second win of the season in an action packed main event in Seattle.

Fears of rain loomed as they always do when the Monster Energy Supercross series heads to Seattle, but despite a few sprinkles, the track held together great for the races.

Points leader Christian Craig (Monster Energy Star Racing Yamaha) blasted out of the gate, grabbing the holeshot with Michael Mosiman(TLD Red Bull GasGas) in tow. The duo broke away from the pack, with Mosiman pouring pressure on in the opening laps.

Mosiman didn’t wait long to make a move, diving in for the pass before the finish line, connecting with Craig and sending him to the ground. Craig dropped to fourth, as Lawrence began to charge after Mosiman at the front on the heels of a bad start.

Lawrence made his way around Mosiman, but looming in the background was Craig, who was on a mission toward the front, lapping faster than both of the leaders, passing Mosiman with six minutes to go.

Craig charged in the closing stages, but was unable to close the gap, giving Lawrence his second win of the season. Craig held on for second, with Mosiman bringing his TLD Red Bull GasGas machine home in third.

Fourth went to Jo Shimoda(Monster Energy Pro Circuit Kawasaki) who made a valiant effort for a podium on the final lap, making a pass but unfortunately a mistake in the whoops kept him from the box.

Vince Friese followed up the first heat race win of his career earlier in the night with a fifth place in the main event aboard his SmarTop Bullfrog Spas MotoConcepts Honda.

Muc-Off FXR ClubMX Yamaha rider Garrett Marchbanks showed plenty of pace throughout the evening, but was unable to get off to a good start in the main event to put himself in the hunt for a podium, eventually finishing sixth.

Rounding out the top 10 was Robbie Wageman(Yamaha) and Derek Kelly(KTM) with Nate Thrasher finishing 11th after crashing out of fourth place as he challenged for his first podium of the season.

While his points gap got slightly smaller, Craig maintains the championship lead by 26 points over Lawrence as they take a week off before the first East/West shootout of the season in Atlanta. 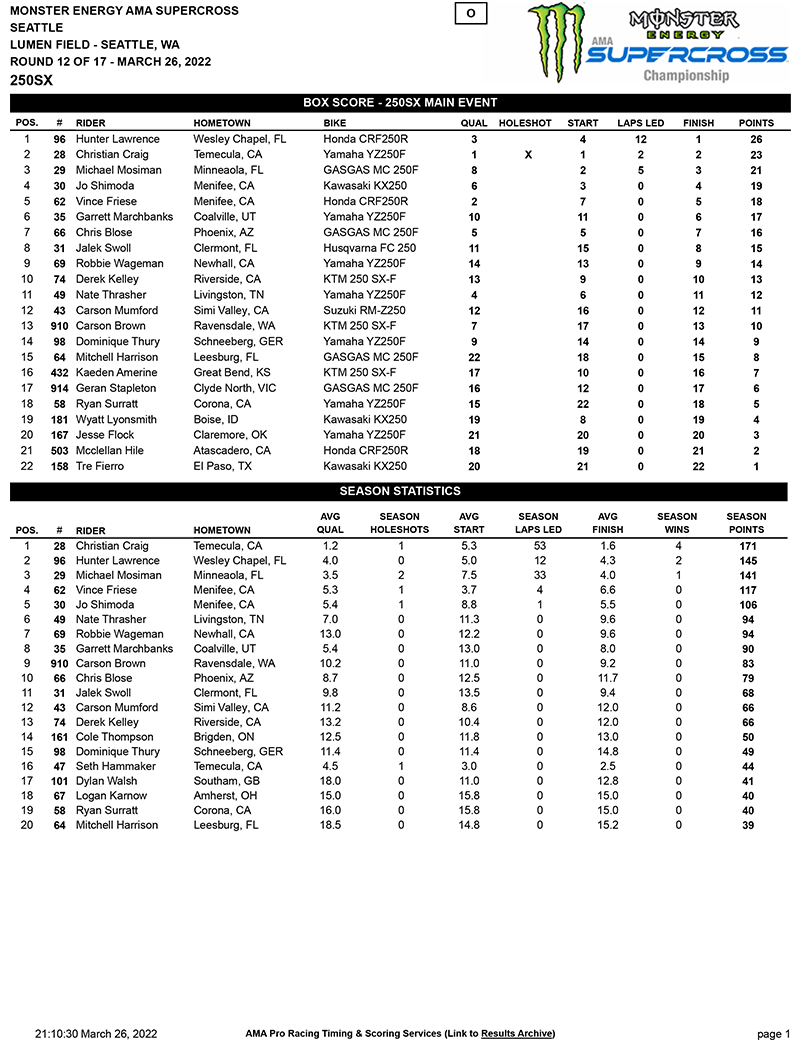