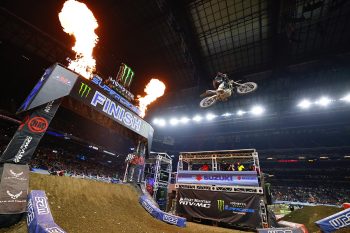 In an eventful night of Monster Energy Supercross, Eli Tomac’s patience paid off as he grabbed the win and stretched his points lead to 48 at Lucas Oil Stadium.

The traditional soft soil of the Indianapolis round made for great racing throughout the evening on the shortest and roughest track riders have faced all year, setting the stage for a wild 450SX main event.

As the gate dropped on the main event, Justin Barcia(TLD Red Bull GasGas) stormed to the lead with Jason Anderson(Monster Energy Kawasaki) and Malcolm Stewart(Rockstar Energy Husqvarna) in tow. Tomac however didn’t wait long to work his way into the mix, passing Stewart and catching the lead duo quickly.

The leaders worked their way into lapped riders within the first five minutes of the race, setting the stage for a chaotic few minutes, and allowing Stewart to close. As things heated up, a mistake in the whoops by Barcia saw Anderson grab the lead.

Anderson’s good fortune didn’t last long, with Barcia reclaiming the lead with a block pass that put Anderson on the ground, dropping him down the order and subsequently out of the running for the win.

Barcia maintained the lead for the middle portion of the race, with Tomac and a charging Marvin Musquin(Red Bull KTM) closing in with seven minutes to go. Tomac charged at the five minute mark and put a pass on Barcia for the lead and looking as though he was going to check out for a win.

A mistake by Tomac saw Barcia close the gap in the final moments of the race, but Tomac was not to be denied, taking the win and stretching his points lead to 48 points in the process.

Barcia and Musquin rounding out the podium, but official results were not yet posted at the time of publishing, as officials review Barcia’s move on Anderson.

A last lap battle saw Sexton hold off Webb for fourth, the duo recovering well after a collision last week that ended both of their races.

Anderson eventually ended up sixth place after his collision with Barcia, the latter taking over the second place position in the points in the process.

Dean Wilson(Rockstar Energy Husqvarna) had a solid day that saw him finish seventh, while his teammate Stewart crashed hard in the closing stages and eventually finished eighth. Rounding out the top 10 were Vince Friese(Smartop Bullfrog Spas Honda) and Ryan Breece(Yamaha).

Tomac now leads Barcia in the championship by 48 points as the series heads to Seattle, Washington for round 12 of the season. 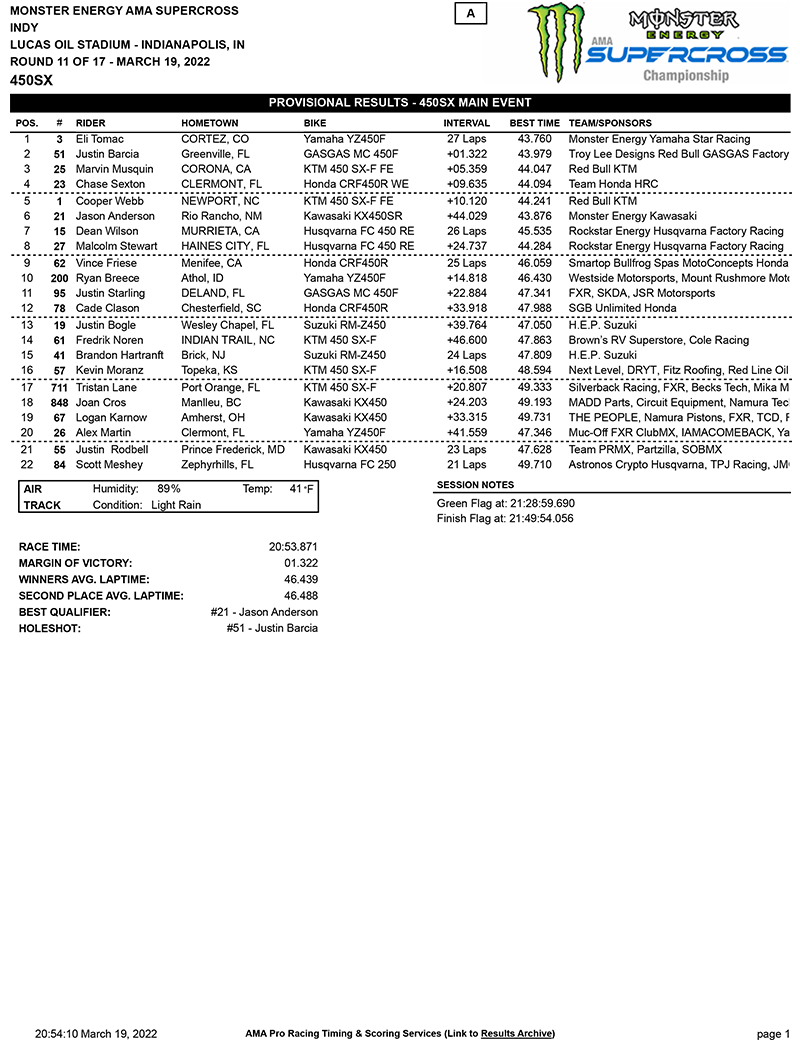